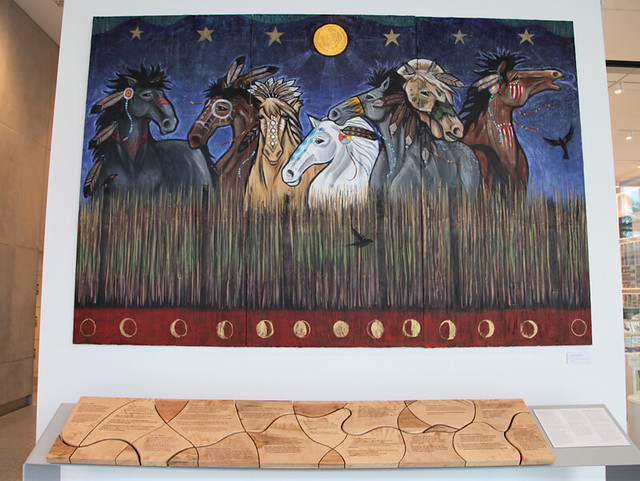 When visitors first enter the museum, they will be greeted by a statement in 13 Indigenous languages, along with English and French. It welcomes them to the museum and acknowledges that the land on which they stand is Treaty Six territory and a meeting place for generations of First Nations and Métis peoples.

From the importance of language and connection with the buffalo to stories of First Nations women who fought to regain their treaty rights, Indigenous content is widely represented in the new Royal Alberta Museum (RAM), opening Oct. 3.

Over the past four years, museum staff have worked closely with Indigenous communities and a 24-person Indigenous Content Advisory Panel to develop content and exhibits for the museum. Inside the new Human History Hall, there are 150 individual exhibits  — almost half of these address Indigenous themes.

“Together, museum staff and Indigenous advisers have worked thoughtfully and passionately to develop meaningful galleries that share stories of Indigenous culture with future generations. These stories will live on as the uncensored accounts of Indigenous experiences in Alberta.”

“Staff at the museum have put a lot of effort into connecting with the diverse Indigenous groups across Alberta. They have listened to our recommendations and have acted on them which has resulted in the outstanding museum you will see.”

In addition to providing extensive input into the museum’s gallery development, panel members also conducted ceremonies and blessings of both the new museum and the former Glenora facility.

Once the museum opens on Oct. 3, visitors can expect to see and hear Indigenous stories through first-hand accounts. Indigenous content is presented in a variety of ways, including hundreds of objects on display, exhibit text panels translated into Indigenous languages, and films that can be heard or captioned in an Indigenous language, including Plains Cree, Woods Cree, Blackfoot,  Dene Tha’, Dënesųłiné, Stoney Nakoda, Nakota, Saulteaux, and Michif.

In addition, when visitors first enter the museum, they will be greeted by a statement in 13 Indigenous languages, along with English and French. It welcomes visitors to the museum and acknowledges that the land on which they stand is Treaty Six territory and a meeting place for generations of First Nations and Métis peoples.

The Royal Alberta Museum rests on Treaty Six territory and the homeland of the Métis. Many of the objects in RAM’s collections and many of the stories presented in the galleries are Indigenous. In the spirit of reconciliation, and to honour the unique relationship between Indigenous Peoples of Alberta and the Crown, the museum extends free admission to Indigenous Peoples.

This aligns with initatives of other Canadian museums that hold and exhibit Indigenous objects.

With the official opening on Oct. 3, the RAM will take its place as the largest museum in Western Canada, spanning almost 40,000 square metres (419,000 square feet). This includes more than 7,600 square metres (82,000 square feet) of exhibition space – twice as much as the former Glenora location. The new space allows RAM to provide visitors with new objects and stories to explore, in addition to old favourites that everyone knows and loves.

More than 5,300 objects will be on display in the museum that features: