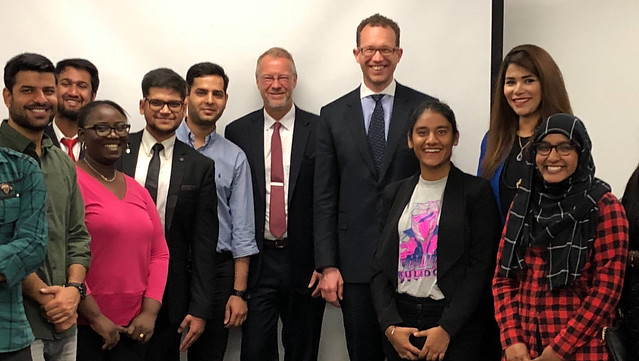 Minister Schmidt visits students at Concordia University Masters of Information Systems Security Management to discuss next steps for the Growth and Diversification Act.

Through the act, government will launch programs designed to diversify and grow the province’s economy, including 3,000 new spaces for technology programs in Alberta’s colleges and universities with a $50-million, five-year investment.

“It’s important that we prepare Albertans for success in a new and diversified economy. We’re investing in education and training programs to build a strong, skilled and adaptable workforce that will support economic diversification and competitiveness in the province’s burgeoning tech sector.”

The province will launch an open recruiting process for 14 members to form the Talent Advisory Council on Technology (TACT). The council – a mix of leaders from the tech industry and post-secondary institutions, along with student and labour representatives – will share ideas, help inform policy decisions and identify the current and future skills needed to support Alberta’s tech economy.

Co-chaired by industry and government, TACT will be a vital connection between technology, talent and today’s economic needs. The council is expected to hold its first meeting later this summer.

By this fall, 200 new tech learning spaces will be allocated at post-secondary institutions in Alberta. Government is working with the province’s post-secondary institutions to determine the allocation of the initial 200 spaces so that students can begin classes for the upcoming academic year. To supplement the 200 tech training spaces, short-terms skills programs, lasting three to 12 weeks, will be developed to help Albertans quickly enter the tech workforce.

“We know that the economy in Alberta is transforming rapidly.   That’s why we are creating initiatives that will help strengthen Alberta’s tech sector and will support the continued economic diversification that is underway. We have the talent, training programs and the investment climate needed to push Alberta’s economy boldly into the future.”

In addition to expanding technology education programs, the act will help Alberta digital media companies recruit and retain more homegrown talent with the new Interactive Digital Media Tax Credit. This credit provides eligible companies with a 25 per cent refundable tax credit on eligible salaries and wages, and creates incentives for companies that hire employees from under-represented groups. The existing Alberta Investor Tax Credit and Capital Investment Tax Credit are being maintained to spur continued economic growth in the sector.

The Growth and Diversification Act is part of the government’s commitment to create an economy built to last, and is an example of how the province is preparing Albertans for a diversified and tech-savvy economic future. Additional information about government initiatives supporting tech-sector growth, including the naming of the TACT co-chairs, will be released throughout the summer.