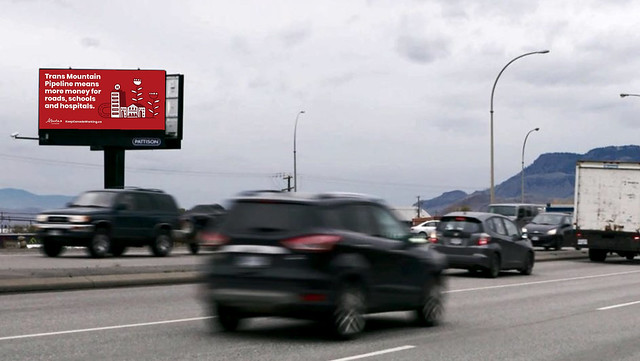 An example of a billboard supporting Trans Mountain Pipeline in Kelowna, B.C.

The “Keep Canada Working” campaign will inform Canadians about the benefits of market access and counter the misinformation, harassment and obstruction that the project has faced.

The campaign’s goal is to speed up market access for Alberta’s energy products by increasing awareness of the benefits of an expanded pipeline and - as a result - increasing support for its speedy construction.

“It is important that Canadians understand what’s at stake when we talk about the Trans Mountain Pipeline expansion. A lack of market access is costing Canadians good jobs. It is putting the national climate plan at risk. And it is costing Canada billions every year – money that could be paying for things like roads, schools and hospitals from coast to coast to coast.”

The lack of access to international markets is costing the Canadian economy up to $15 billion annually, or approximately $40 million per day. The cost to Alberta government revenue alone represents about $2.3 billion per year, or $6.5 million every day.

The “Keep Canada Working” message will be shared via billboards, television, radio, search engine marketing, online display and social media. Billboards and digital advertisements have been running since April 30. Television and radio advertisements are in production.

The ads will direct people to KeepCanadaWorking.ca, where they can find more information on how the pipeline expansion will directly benefit Canadians and how they can get involved.

Advertisements at launch include the following messages: