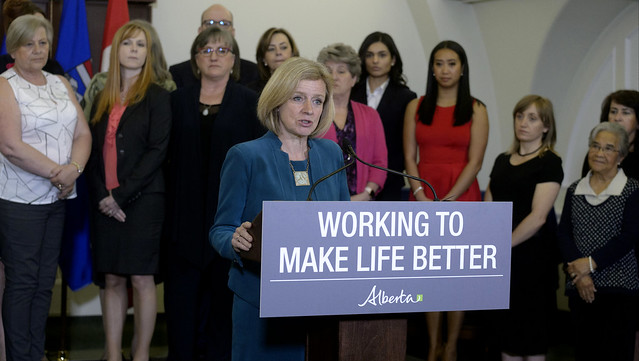 To start the month, the province is launching a new Commitment to End Sexual Violence. Developed through extensive consultation with dozens of front line providers, advocates and survivors, the commitment brings ten government ministries and community organizations together to deliver a coordinated, province wide response to address sexual violence in Alberta.

“Every Albertan deserves to live free from sexual harassment and assault. Sexualized violence is a crime of power and control, and governments have a duty to lead, to offer hope and healing to survivors, to make workplaces and campuses safe and to tackle the inequality at the root of this violence that most impacts women and girls.”

The commitment has three pillars:

“I never thought I would see this day. Raising awareness about sexual violence not only helps bring these crimes out of the shadows, it’s clear with this commitment today that, for the first time, the priorities of government reflect me and the needs of survivors across this province.”

During May, the province will announce initiatives to support the commitment and build on actions taken to address and prevent sexual harassment and assault.

Since 2015 government has invested close to $52 million to support a range of programs and services to prevent sexual violence and support survivors in communities across Alberta, including:

“We are pleased to be a partner in the government’s commitment to prevent sexual violence and provide better support to those who are affected. Sexual violence is a problem that affects all communities in our province and will require a united effort by government, community organizations and individuals to eliminate.”

“Every Albertan has the right to live free from violence. Perpetrators of sexual violence violate that right.

“The Government of Alberta does not tolerate these abuses of power and control. Though anyone can experience sexual violence, we recognize it impacts women and girls most. We stand firmly with survivors, advocates and community agencies to stop sexual violence in all its forms.

“We commit to supporting survivors, improving our response, and shifting to a culture of consent by advancing gender equality. We will work until all survivors are believed and supported, and this violence is eradicated from our communities.”