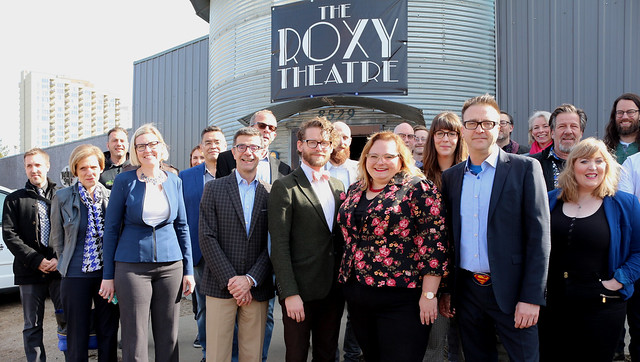 Deputy Premier Sarah Hoffman joined by Garner Beggs, vice chair of the 124th Street Business Association, members of the Theatre Network board and representatives from the Edmonton’s arts and business community announce provincial support for the building of the new Roxy Theatre.

The province will provide $2.5 million in funding to Theatre Network to help support construction of a new facility to replace the original Roxy, destroyed by fire in 2015.

“For almost 80 years the Roxy was one of the stars of the city’s arts community – first as one of Edmonton’s most popular cinemas and then as home to the excitement of live theatre. We are proud to join Theatre Network, the City of Edmonton and the Government of Canada as work begins toward raising the curtain on the next act of the Roxy story.”

“The Roxy exuded history in all of its creaks, crannies and character. The fire was devastating, but it brought out the resiliency of Edmonton’s theatre community. This new theatre will be a fitting encore, adding to the character of our flourishing 124th Street neighbourhood.”

“The show goes on for the Roxy and this contribution by the Alberta government is an investment in the future of live theatre in Alberta. In creating much-needed venue space, the new theatre will also help support Edmonton’s incredible cultural festivals, including our own Nextfest, and create new opportunities for Alberta’s talented writers, performers and technicians. All of us at Theatre Network look forward to the Roxy once again serving as a vital community hub for the Westmount neighbourhood and the 124th Street business district.”

The new facility, to be located on the site of the original theatre, will include three distinct performance spaces and integrated backstage and front-of-house areas. In a nod to the past, the design of the building entry will help recreate the historic character of the Roxy Theatre marquee on 124 Street.

The $12.5-million project is expected to create an estimated 51 direct jobs during construction and generate almost $2 million annually in economic activity. Theatre Network is looking to break ground on the project in spring 2019 and is targeting completion to coincide with the 2020 theatre season.

The $2.5 million in provincial funding will be provided through the Other Initiatives Program using existing resources in Culture and Tourism’s 2017-18 budget. The project has also received initial support from the federal government and the City of Edmonton.