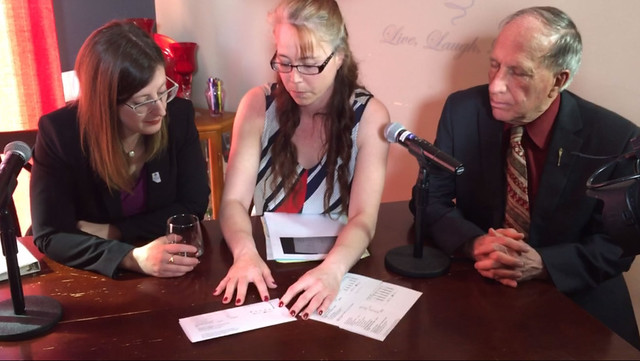 Minister McLean reviews a bill with homeowner Trina Okimaw-Scott, along with MLA for Wetaskiwin-Camrose, Bruce Hinkley

If passed, An Act to Empower Utility Consumers would expand the mandate of Alberta’s Utilities Consumer Advocate (UCA) to create a one-stop shop for Albertans to resolve disputes with their utility bills. Currently, the UCA mediates disputes between consumers and electricity and natural gas providers. This legislation would increase their role to include water, sewage and drainage.

“Many Albertans have recently shared stories of feeling powerless when they were hit with unusually high water bills, and had nowhere to turn for help. Today, we empower consumers by giving them a helping hand to resolve their water bill concerns.”

The UCA routinely receives calls from water customers looking for help with billing, customer service, disconnection and metering issues. Currently, most of these callers are sent back to the municipality or water utility provider.

Consumer Trina Okimaw-Scott experienced this first-hand when she received a water bill that was triple the usual amount, despite her being away from home for a month.

“When people get unexpected, unexplainably high water bills like I did, they shouldn’t face immediate disconnection of such an essential service. This new mediation service will help consumers like me who had nowhere to turn when my provider refused to accept that I may not have been at fault for the billing consumption information they got. We’ll now have someone neutral there to help us navigate our next steps.”

“Listening to customers and treating them fairly and equitably is important to EPCOR. We see the UCA as a partner in helping to resolve customer billing questions, and a beneficial addition to the process we have in place with our water customers today.”

“Since 2003, the Utilities Consumer Advocate has worked with thousands of residential, agriculture and business consumers of natural gas and electricity to advocate on their behalf. In the past, the RMA has represented consumer interests on the UCA board and we believe the expansion of mediation and education services to consumers of water utilities is an important step forward to ensure consumer concerns are addressed in a fair and timely manner.”

If passed, the act would also expand UCA’s ability to report how natural gas and electricity providers are performing, so consumers can make informed choices when buying power or heat for their home. The UCA would report on the following online, in a user-friendly web page: