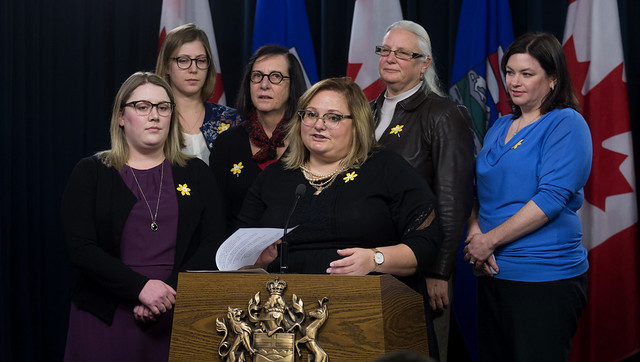 Minister Hoffman is joined by the co-sponsor of the legislation, MLA Deborah Drever, and staff from the Woman’s Health Options clinic.

The Protecting Choice for Women Accessing Health Care Act would safeguard women who choose to access abortion services, as well as abortion clinic staff, from protests, interference, bullying and intimidation.

“It’s not okay that Alberta women still face aggression, bullying and harassment for making choices about their health care. We need to protect women, their families, and health-care professionals from threats and intimidation around abortion services.”

The legislation would establish 50-metre “access zones” at Alberta’s two non-hospital abortion clinics – Kensington Clinic in Calgary and Woman’s Health Options in Edmonton – to prevent intimidation, interference or protesting against patients, doctors and clinic staff. Visual or audio recordings of patients, doctors or staff within an access zone would also be prohibited.

The legislation would allow doctors and service providers to request a regulated access zone of up to 160 metres for their homes or 20 metres for an office. It would also be illegal to use repeated phone, mail or electronic communications to try to convince a doctor or service provider to not provide abortion services.

“Women who come to our clinic have had to make a difficult decision in choosing abortion.  They should not have to be faced with intimidation, harassment, fear and interference when entering and accessing a health care facility.”

“There is ample evidence that anti-choice harassment and intimidation is a serious problem throughout the country and that access zone legislation works to protect patients, practitioners and their staff. Alberta is responding to an urgent call by making a strong statement that intimidation and harassment are unacceptable.”

“Unwanted pregnancy is one of the many negative consequences that sexual assault survivors must face. No woman in Alberta, especially a woman who is pregnant as a result of sexual assault, should have to endure harassment and intimidation while accessing abortion services. Access zones would allow women to receive these services safely, without fear of being shamed and re-traumatized.”

The legislation would create escalating fines for repeated violations of the act, up to $10,000 for an individual or $100,000 for a corporation.