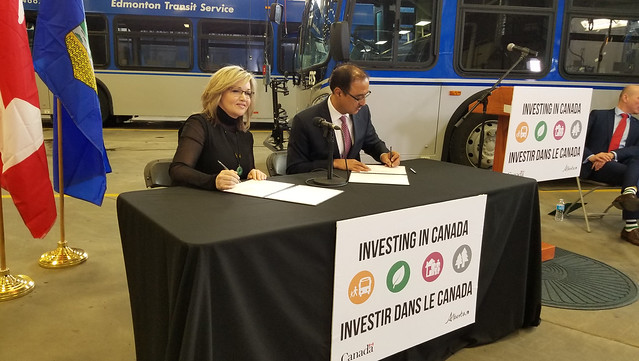 Today, Amarjeet Sohi, federal Minister of Infrastructure and Communities, and Sandra Jansen, Minister of Alberta Infrastructure, announced the signing of a bilateral agreement that will provide more than $3.3 billion in federal funding through the Investing in Canada plan over the next decade for infrastructure projects. These projects will be cost-shared with the Alberta government, municipalities and other partners.

These investments will have benefits for people in communities across the province, including:

The funding builds on Alberta’s 2018 Capital Plan, which commits $26.6 billion over five years to support priority infrastructure projects across the province.

“I am pleased that Alberta and the Government of Canada have reached an agreement that will benefit communities across the province for years to come. Investments in infrastructure are key to building a strong Canada – connecting people, creating good jobs for the middle class, and strengthening our economy and our communities for the future. Today’s agreement will provide the long-term predictable funding required to meet the needs of all Albertans, from those living in busy city centres to remote rural towns. I look forward to continuing to work with our provincial, municipal and Indigenous partners to make strategic investments in Alberta that will build inclusive resilient communities where everyone has opportunities to succeed.”

“This historic infrastructure agreement provides communities of every size across Alberta the opportunity to drive economic growth and support families and businesses. This $3.3-billion investment in Alberta will support public transit, green infrastructure, cultural and recreational buildings, and help build rural and northern communities.”

Under the $180-billion Investing in Canada infrastructure plan, the Government of Canada is signing new 10-year bilateral agreements with all provinces and territories that will see more than $33 billion in federal funding invested in infrastructure projects across the country. The objective of these investments is to transform the way Canadians live, move and work across four priority areas:

* Outcomes will be obtained through projects, which will be communicated in more details as they are announced.

Under these new bilateral agreements, the Government of Canada will not only make significant investments in Canadian communities, but open the door to unique innovative project ideas that meet the agreed-upon outcomes. These new ideas will contribute to the long-term sustainability of our infrastructure.

To ensure our partners consider opportunities to mitigate greenhouse gas emissions or better adapt to climate change during the project development stage, a new climate lens will be applied to certain projects. Partners will also report on how larger projects are creating job opportunities for a broader array of Canadians in the construction industry and related sectors through a new Community Employment Benefits framework.

The Public Transit stream will provide provinces, territories and municipalities with funding to address the new construction, expansion, and improvement and rehabilitation of public transit infrastructure.

Note that other recipients of transit allocations will be announced at a later date.