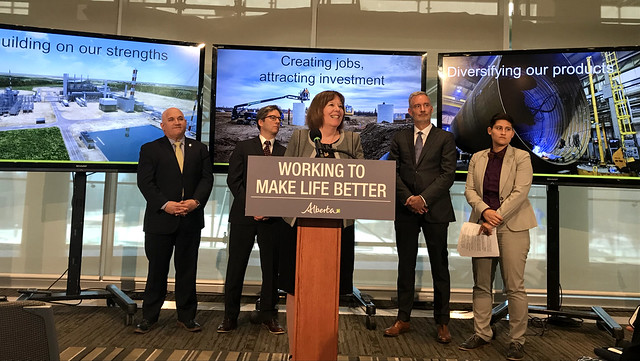 A combination of loan guarantees, grants and royalty credits would support an expanded Petrochemicals Diversification Program and a program to ensure needed infrastructure for petrochemical feedstock.

These programs form the three pillars of The Energy Diversification Act, tabled in the legislature on March 8.

“By supporting diversification in our energy sector, we’re supporting good jobs and building an economy to last. That’s why we’re taking action to ensure Alberta is even more competitive for major private investments in the petrochemicals sector. Adding more value to our raw products at home means more jobs for Albertans and getting top dollar for our resources.”

Alberta’s commitment would total up to $2 billion to leverage long-term private investment, including:

The second round of the Petrochemicals Diversification Program would expand to accommodate proposals that include using ethane, in addition to propane and methane. Ethane, methane and propane are all considered petrochemical feedstocks and are sourced from natural gas and natural gas liquids.

Expanding to include ethane uses would encourage applications for building a new ethane cracker, a large-scale complex petrochemical facility that converts ethane to the necessary components for plastics, detergents, lubricants and other household products.

Alberta’s petrochemical manufacturing industry employs more than 7,500 people directly with annual exports of $8.2 billion, the largest the manufacturing sector in the province.

“This is an incredibly courageous move on the part of the Alberta government. We believe that governments at all levels in Canada need to work with industry to compete for new chemistry sector investments. To do nothing means that some other jurisdiction will use our energy resources as feedstock to create value. Taking a balanced approach to share risk and secure new investments here in Alberta will create wealth and opportunity for Albertans. It’s the right thing to do.”

Two successful applicants were awarded support under the first round of the program in 2016. Calgary-based Inter Pipeline received credits for a portion of its $3.5-billion propane-to-polypropylene complex which is already under construction in the Industrial Heartland near Fort Saskatchewan. At the peak of construction, an estimated 2,300 direct full-time jobs would be created and, once complete, the facilities would employ 180 people.

“We are pleased that another round of this program has been announced because the incentives it provides, combined with abundant low-cost feedstock, place Alberta among the top locations to construct world-scale petrochemical facilities. Investments like Inter Pipeline’s Heartland Petrochemical Complex will support strong communities and Albertans for many years to come.”

Alberta has only captured a small part of the $185 billion of investment in value-added sectors over the last decade, as reported by the Energy Diversification Advisory Committee. These programs would increase Alberta's competitiveness with other jurisdictions, including the U.S. Gulf Coast, and ensure a greater return on the investment for Albertans over the medium- and long-term.

Successful projects represent thousands of construction jobs and hundreds more in operations as well as increased royalties and tax revenues for the province and municipalities, which help pay for services Albertans rely on.

“We applaud the government for its decision to support more value-added processing. We know this will help drive major firms toward investing in our region, bringing new opportunities and benefits to the people of Strathcona County and communities around the Industrial Heartland.”

The second initiative, the Petrochemicals Feedstock Infrastructure Program, would focus on helping secure a larger supply of the raw components needed in petrochemical manufacturing.

The investments would encourage industry to move forward on the facilities and infrastructure needed to capture more natural gas liquids required for value-added development. This includes components such as ethane, methane and butane, with ethane recovery being the primary focus.

These developments could include new natural gas processing facilities, smaller projects built closer to wellheads or straddle plants, facilities that are built along major natural gas pipelines that can extract certain components during transportation.

These two programs complement each other because the greater and more stable the supply of these raw components, the greater the potential of attracting and supporting more value-added developments in Alberta.

As recently announced, the Partial Upgrading Program would help support full-scale commercialization of partial upgrading technologies through the construction of two to five facilities, representing up to $5 billion in private investment, 4,000 jobs during construction and 200 full-time jobs during operation.

These initiatives support the vision of the government’s throne speech and build upon recommendations from the Energy Diversification Advisory Committee.