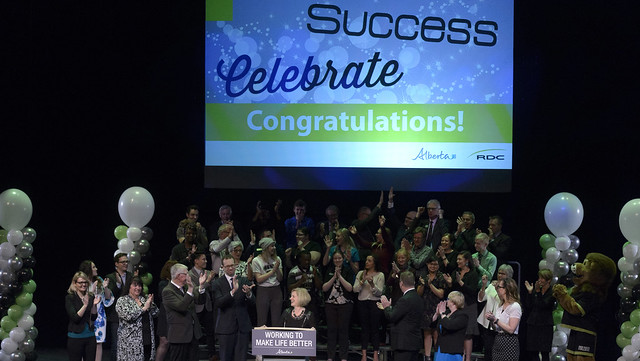 Red Deer College (RDC) currently offers a number of degrees in partnership with other universities. However, students often have to move to other cities in order to complete their programs. Allowing RDC to develop and offer comprehensive degrees means that students will be able to complete their education in central Alberta, while staying in the region to find employment.  This transition will help create a diverse workforce and stronger regional economy.

The decision comes one week after the government gave Grande Prairie Regional College approval to pursue becoming a university. The change means future generations of students in northwestern Alberta will not have to bear the financial costs and stress of moving away from their community, just to pursue their career goals.

“We want to make it easier for young Albertans to get a great education. Rather than jacking up costs and making reckless cuts to our classrooms, we’re investing in our students. The decision to allow Red Deer College and Grande Prairie Regional College to develop and grant undergraduate degrees is a historic move. Not only will it put these colleges on an exciting new course, it will help make life better for people in central and northwestern Alberta.”

“So many Albertans come to RDC to fulfil their dreams, and our government is proud to enhance its role as a driving force in the region’s economy. This decision will ensure that more students can stay close to home to study and work, creating a vibrant and dynamic community.”

Home to almost 100,000 residents, Red Deer is Alberta’s third-largest city, and is one of the main economic hubs in the province. By empowering Red Deer College to grant degrees, while still offering all of its current programming, the government is ensuring central Alberta students have the skills they need to succeed in a growing and changing economy.

“Allowing Red Deer College to grant degrees autonomously and to move towards university status is the right decision, and one that we have been looking forward to for many years. I thank the government for recognizing the important impact this college has on citizens and communities across central Alberta, and for investing in the future of the institution and its students.”

Red Deer College’s designation as a university will be a detailed, multi-year process. The institution will continue to work with the Campus Alberta Quality Council to ensure that all new degree programs meet provincial and national standards for quality.

“Achieving university status is the realization of a 54-year dream for our institution. The announcement today acknowledges the growth, and evolution of RDC as a mature academic institution. The significance of this day will resonate in the communities of central Alberta for generations to come as we serve learners in new and innovative ways.”

“Transitioning Red Deer College towards degree completion plays an important role in our city and the region’s future growth. As an economic hub, Red Deer’s economy continues to diversify and modernize, and securing possibilities for highly trained degree graduates is necessary to support future economic growth.”

“Students are enthusiastic that after almost three decades of working alongside Red Deer College the vision of becoming a degree-granting institution is coming to fruition. Students will have the opportunity to complete their degree on a campus and in a community invested in their success. This announcement means that the students will no longer be forced to uproot their lives to complete their education, ensuring more students become a vital part of central Alberta.”

The Government of Alberta is reviewing other aspects of the post-secondary system and will share more about the modernization in the coming months.