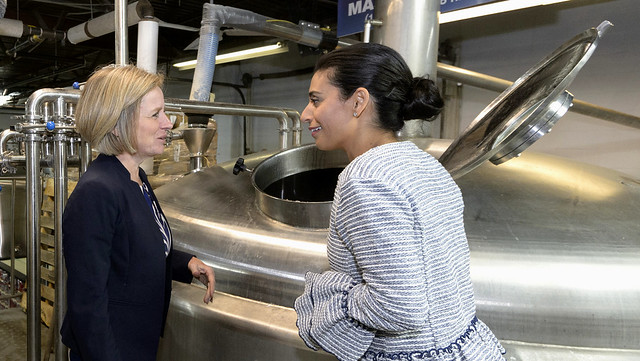 During the past year, the program contributed to nearly 780 jobs in the small brewing industry and the addition of 513 new beer products made in Alberta.

In December, the markup paid to government was cut from $13.67 per litre to $2.46 per litre for Alberta spirit manufacturers who sell from the production facility. This allows entrepreneurs to hire staff, add production or product lines and re-invest in their businesses.

Today, Premier Rachel Notley toured Minhas Micro Brewery, in Calgary, to see the impact of the grant program first-hand and joined the Minhas family as they announced plans for a new distilling facility in Calgary.

“We’re working with entrepreneurs to create jobs. Brewing in Alberta is thriving, with more breweries and distilleries opening their doors or growing their businesses. I’m thrilled Minhas has not only expanded their Alberta beer production, but is also opening a brand new distilling facility in Calgary. This will create more good jobs for Albertans and support our incredible farmers.”

“Minhas Brewery has directly benefited from the Alberta Small Brewers Development Program, and the markup reduction was a key factor in opening a distillery in Alberta. As a result of the grant program and markup reduction, we’ve been able to shift a portion of our production to here in Calgary. Having been born and raised in Alberta, being able to support the local economy – thanks in part to the support of the government – makes me very proud.”

In the first year of the program, the number of small brewers in the province grew from 45 to almost 60, the single largest year-over-year increase in Alberta’s history.

In 2017, government made several changes to improve consumer experiences and provide manufacturers more opportunities to showcase their products. Actions include: