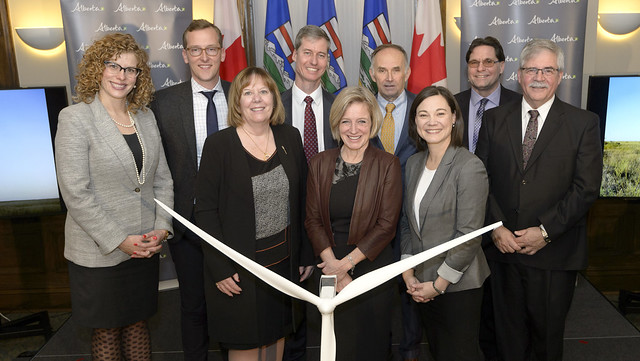 Three companies have been chosen in the opening round of the Renewable Electricity Program, which will result in about $1 billion of private-sector investment in green power generation in Alberta. The successful bids have set a record for the lowest renewable electricity pricing in Canada.

The successful bidders will add approximately 600 megawatts of renewable power, or enough to power up to 255,000 homes, through wind projects throughout the province. This amount represents 200 megawatts more than what was originally planned. The exceptionally competitive response from investors means that even with the added power, the entire auction still comes in under the original budget.

“I’m pleased to see our plan is working to make life better and more affordable. This highly competitive program is attracting investment from Alberta and around the world, creating new jobs in our province while getting Albertans the most renewable power generation for the lowest cost.”

The following companies were successful bidders in round one:

The Alberta prices are the lowest ever recorded in Canada and are among the lowest prices in North America and around the world. This means affordable electricity prices for consumers will continue as renewable power generation grows in the province.

“These prices are beyond expectations, highlighting the strong potential of renewable power in Alberta, the quality of the competitive process and the positive view that investors have of our province. This is a win for power generators, a win for the environment and a win for Albertans.”

“As a southern Alberta MLA, I’m overjoyed with this announcement. The historically low prices mean that our investment of carbon dollars will go even further to generate low-cost renewable power for Albertans. This is a perfect example of our made-in-Alberta Climate Leadership Plan in action: where we’re creating good mortgage-paying jobs, diversifying the economy and working to make life better for all Albertans.”

Support for the Renewable Electricity Program is made possible by the Climate Leadership Plan and is not funded by consumer electricity charges. In total, the program will support the development of 5,000 megawatts of renewable electricity capacity to reach a target of 30 per cent renewable energy by 2030. Development of the next rounds of the program is underway with more details expected in early 2018.

The first round attracted investment from both international and Alberta-based companies and is expected to create approximately 740 jobs. By 2030, the program is expected to attract at least $10 billion of investment into the Alberta economy and create more than 7,000 jobs for Albertans.

“As an Alberta-based company, we’re proud to be selected amongst global competition to be one of the first projects under this program to drive Alberta’s transition to a clean energy future. With the exceptional wind resource in southeast Alberta, Whitla Wind will be an excellent and low-cost source of new wind power for Albertans.”

“We’re thrilled to be investing in Alberta and look forward to the Sharp Hills Wind Farm opening in the Hanna area, which has a strong track record in energy production. As a global company, we look forward to creating jobs and tax revenue for this region while generating low-cost, clean electricity for Albertans to enjoy.”

“This award is a major milestone for our company. We are thrilled to be investing once again in the Canadian energy economy and to continue our growth here in Alberta. We have experienced unprecedented development in North America over the last years and this award is yet another example of our success and global competitiveness.”

“The great interest in this competition, and the record-low prices secured, positions Alberta well as it works to meet its renewable energy objectives in the Climate Leadership Plan. Our industry looks forward to working collaboratively with communities across the province to deliver significant local economic benefits as Alberta capitalizes on its untapped potential to deploy clean, reliable and affordable wind energy.”

“Today’s announcement sends a strong market signal that Alberta’s energy sector is open for business. We’re encouraged by both the extremely low cost of this renewable power and the competitive market opportunities our energy evolution presents to companies from around the globe. Our team is at the forefront of marketing Alberta’s energy story to the world, and we look forward to continuing to work with these organizations as they grow their presence in the Alberta market.”