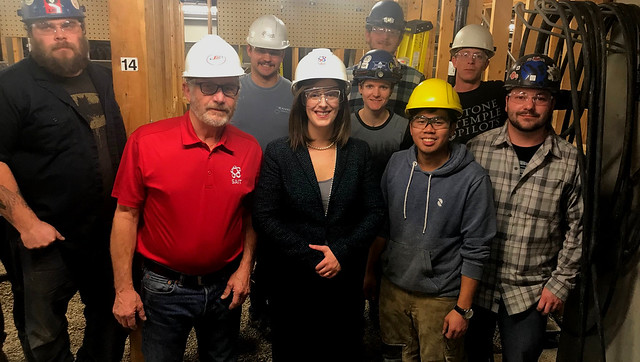 Minister Stephanie McLean joins next generation of contractors at SAIT to talk consumer protection and investigation.

In addition, Service Alberta’s investigations led to a first-ever conviction for charging an illegal interest rate on a payday loan, and a nine-month jail sentence for a home renovator for misleading customers and operating without a licence.

“Everyone deserves to be protected when they are making a purchase or signing a contract. But when those rights are violated, we take action to protect consumers from scams, bad deals and pushy sales pitches. Our investigations create consumer confidence and that’s good for business as Alberta’s economy continues to look up. If you have an incident to report, I urge you to call our consumer protection line so we can look into it.”

Since the ban on door-to-door sales of energy products and services came into effect on Jan. 1, the consumer investigations team has closed 129 investigations, up from 44 in 2016.

One of those cases included Tam Dang’s family, whose consumer rights were violated by a door-to-door furnace and HVAC seller that sold them a home Air Filtration System add-on to their heating system. Soon after installation, the equipment needed repairs and when the family decided to cancel the contract, the company refused to honour the cancellation rights and put a lien on their home for the cost of the contract.

After assistance from Service Alberta, the family got their money back, the contract was cancelled and the lien was removed in July 2017. The company was fined $3,000 and had its licence cancelled by Service Alberta after investigations revealed the company’s sales practices, contract terms and training activities represented serious contraventions of the Fair Trading Act.

“Without the help of the Consumer Investigations Unit, we would be making payments for 10 years on equipment we don’t even use. Make sure you come forward with concerns and file a consumer complaint – this process can protect your rights against companies that target vulnerable people, especially seniors.”

In addition to court-ordered penalties, Service Alberta undertook a number of administrative actions, including issuing more than $30,000 in fines and ordering multiple businesses to comply with laws and regulations. The details of these actions are posted at ServiceAlberta.ca.

Highlights of 2016-17 enforcement activities include:

The courts ordered restitution of $957,010 to 77 complainants in cases involving issues such as:

Resolutions were reached in the following areas:

Over the last five fiscal years:

Tips to protect yourself