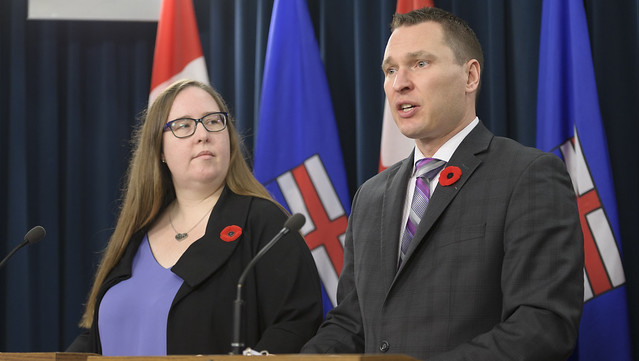 Christina Gray, Minister of Labour, and Deron Bilous, Minister of Economic Development and Trade, announce supports for workers affected by coal phase out.

The province is requesting that the federal government immediately create new flexibility criteria in the federal Employment Insurance (EI) program that would allow workers to receive these income supports without reducing their EI payments – and to also extend the duration of EI benefits for coal workers.

“Alberta coal workers have a proud history of helping to power our prosperous and industrious province. I’ve heard first-hand how important it is to make sure we support workers and families as the country transitions away from coal. We’re calling on the federal government to step up and do their part to ensure this fund can help these workers earn a good living for themselves and their families.”

“To all Alberta coal workers: we have your back. We know the move away from coal has created a lot of uncertainty, and that’s why we are working with you to make sure you have new opportunities to build a good life for yourselves and your families in your communities. Our government stands ready to support you.”

In addition to the Coal Workforce Transition Fund, the Government of Alberta will provide workers with:

The new initiatives for workers are in addition to the recently announced Coal Community Transition Fund, which supports locally led projects that focus on regional partnerships and economic diversification in Alberta’s coal communities.

Both initiatives are part of the Alberta government’s response to recommendations from the Advisory Panel on Coal Communities.

The province commissioned the coal panel’s work following the Coal Transition Report from world-renowned energy expert Terry Boston. Boston has worked on complex energy issues for decades on four continents, and oversaw the successful transition off coal for one of the world’s largest electricity grids.

Based on his recommendations, the Alberta government reached agreements last year that ensure power companies: