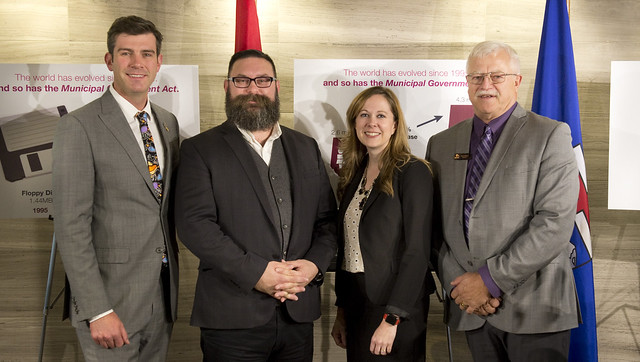 This is the first time in more than 20 years that wholesale changes have been made to the Municipal Government Act (MGA), which affects the lives of all Albertans by setting the rules for how local governments function and provide services to citizens.

The updated act ensures municipalities are governed in an open and transparent manner, keeps municipal councils accountable, creates a framework for greater regional collaboration and improves the consistency of the municipal revenue framework.

“The last time the laws that guide municipalities were extensively updated was in 1995. At that time, fewer than one in 10 Canadians had a cellphone and the Baltimore Stallions won the Grey Cup. A lot has changed since then, including the needs of our communities. I am proud of the work we’ve done with local governments and stakeholders to modernize the MGA. This updated piece of legislation provides municipalities the tools and resources they need to build strong communities and make lives better for Albertans.”

Amendments to the MGA, the rulebook that Alberta’s municipalities use to govern and plan, were made through three bills passed by the legislature since 2015. Changes include:

Provisions of the act will come into force in phases, with some happening immediately and others becoming effective on Jan. 1, 2018 and in April 2018.

"Today's proclamation is a positive recognition of the key role municipalities play in working together to benefit the economy of any region. I know my Edmonton Metropolitan Region colleagues and I look forward to continuing to work with our partners at the province to ensure our region contributes to Alberta's sustained economic prosperity."

“Albertans expect provincial and municipal governments to work together to achieve the best possible outcomes for communities. I am particularly proud of how AUMA and AAMDC came together to advocate for our members, and I believe this relationship speaks to the spirit of inter-municipal collaboration contained within the new MGA.”

“The hard work of the last five years by Municipal Affairs, AAMDC, AUMA and many other committed associations and industries has resulted in legislation that focuses on collaboration. We came to the table with goodwill and we will move forward with those same intentions. However, the work doesn't end here. As this legislation rolls out, AAMDC will continue to monitor the impact and advocate that the Modernized Municipal Government Act continues to meet the changing needs of rural Alberta.”