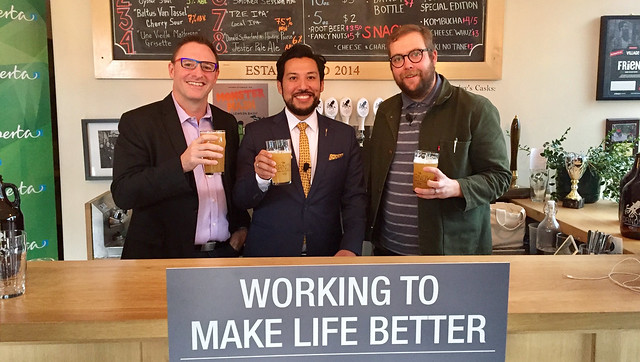 A grant to the Alberta Small Brewers Association (ASBA) will help develop the province’s local beer brand to establish craft brewing as a must-visit experience for beer fans and brewers from around the world. The grant announcement is being made in conjunction with and to help celebrate Alberta Beer Week, which runs Oct. 20-28.

“The craft brewing industry adds to the vibrancy of the province’s culinary tourism offerings and helps highlight the importance of the food and beverage industry to the visitor experience in Alberta. The ‘Alberta Beer’ grant will help diversify our economy and create good-paying jobs for Albertans by supporting small businesses, tourism, manufacturing and agriculture sectors. Now, we have the opportunity to truly show people what our own craft brewing industry, and our brews, are made of.”

Culture and Tourism’s $60,000 grant will help further grow this industry through the development of the brand, a digital platform to promote local touring and staycations, and the creation of industry-focused education programs. Together, these ingredients will help share and promote Alberta’s beer story.

The “Alberta Beer” brand grant complements other supports provided by the Government of Alberta to grow the craft brewing industry in the province. These policy changes include:

“Alberta's exploding craft brewing industry has deep roots in things that make the province special: our agriculture, our natural environment and our entrepreneurial verve. We look forward to building our industry into a signature attraction for Albertans and visitors alike.”

“Craft brewing has a unique story in Alberta and we can trace our beer back to the seed planted in the ground and the farmer who put it there. Establishing an ‘Alberta Beer’ brand will help the province’s brewers to better share this story, grow and showcase the world-class quality of our products.”