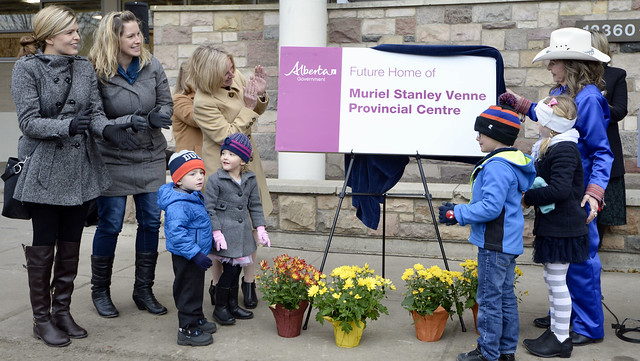 Premier Notley with Muriel Stanley Venne and her family members.

The government is pleased to announce the designation of the Edmonton facility, at 12360 142 Street, as the Muriel Stanley Venne Provincial Centre during Women’s History Month.

The recognition is well-earned, as Stanley Venne is a strong voice for Indigenous women and a fierce defender of human rights.

“Muriel Stanley Venne has dedicated her life to helping improve the lives of Albertans. As an Order of Canada recipient, the founder of the Institute for the Advancement of Aboriginal Women and the creator of the Esquao Awards, there is no one who deserves this honour more than Muriel.”

The Muriel Stanley Venne Provincial Centre is being retrofitted for its new function as a multipurpose government centre. Construction work, currently underway, is anticipated to be complete next spring.

“I am honoured to be the first Indigenous woman in Alberta to have my name attached to a provincial government building. I hope this is a sign to young women and girls across the country that they can raise their voices and demand to be treated with respect. In the past, I didn’t feel welcomed in my community, my province or my country. That has changed today.”

Muriel Stanley Venne has been a leader in the First Nations and Métis communities of Alberta for more than 30 years and has advanced the fair treatment of Indigenous peoples within all levels of society. Her activist path began when former Premier Peter Lougheed appointed her as one of the first seven commissioners to the Alberta Human Rights Commission in 1973. Her work has been recognized by the United Nations High Commissioner for Human Rights and she has received numerous awards for her tireless advocacy.