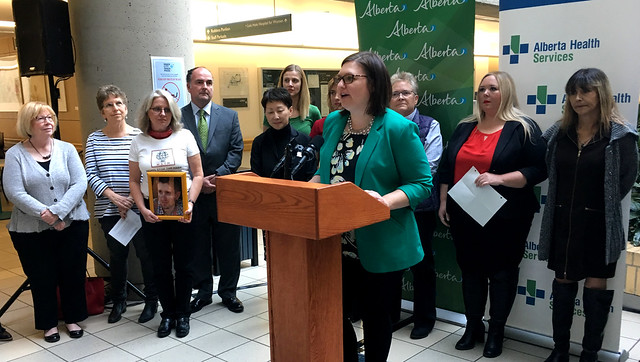 The Lethbridge-based community organization ARCHES has also been granted approval to provide supervised consumption services at a location in the city’s downtown.

“These sites will save the lives of Albertans at risk of dying from a drug overdose. They also provide people using drugs with crucial wraparound services, including connecting them with treatment for substance use when they’re ready. We are pleased with the decision by Health Canada and thankful for the hard work by health care leaders and community groups to bring these services to the Albertans who need them.”

Alberta Health Services has also applied to offer supervised consumption services at the Sheldon M. Chumir Health Centre in Calgary. Approval from Health Canada for this site is anticipated by the end of October.

“These services will provide a safer environment for patients at risk of overdose and enable our staff to assist them in accessing help and supports if they need. This sends a strong message to our patients and all Albertans who struggle with substance use, a message that shows we care about them, that their lives matter.”

Evidence shows supervised consumption services save lives, reduce transmission of infections by providing sterile needles and equipment, and build safer communities by supporting people who use drugs in accessing services and reducing public substance use and discarded needles.

“We are thrilled to now have the formal exemption from Health Canada and the ongoing support from Alberta Health to offer life-saving health services. AMSISE, a coalition of 25 organizations, has been working toward this step for five years. Building micro-sized supervised consumption services into organizations that already work with this population will reach people who are currently using drugs in unsafe environments and connect them with wraparound supports. At the same time, the surrounding areas will benefit, with fewer people injecting outside and less needle debris.”

"ARCHES is delighted to be the first in Alberta to receive an exemption from Health Canada and even more pleased to be the first facility in North America to be exempted for four modes of consumption, including inhalation. Supervised consumption services will save lives and reduce pressure on emergency services as well as reducing public drug consumption and needle debris. I recognize that this is not a panacea but it is a bridge of hope between something and nothing and between life and death. These services will be integrated into the existing services of ARCHES."

“This is an incredibly important announcement for Lethbridge that is going to save lives. I want to thank Health Canada and the province of Alberta for recognizing the urgency of the crisis here in Lethbridge and providing a swift approval of the application to establish supervised consumption services in our city. The vetting process for the application is rigorous, and so I also want to commend Stacey Bourque and the staff at ARCHES for working so hard to prepare an exceptionally thorough application.”

Providing supervised consumption services is part of the province’s urgent work to address the opioid crisis. So far this year, 315 Albertans have died of apparent fentanyl-related overdoses. The government’s actions include a substantial expansion in access to treatment, so more than 3,000 new patients in communities across the province can receive treatment annually.

"Supervised consumption services are one of the few tools we have to prevent death from overdose when it occurs. Today’s announcement clears the way for opening these life-saving services in Edmonton and Lethbridge. Opening supervised consumption services in our province complements urgent efforts to expand the treatment system, increase the number of treatment spaces and introduce new evidence-based treatment options."

“As the president of AAWEAR (Alberta Addicts Who Educate and Advocate Responsibly) and as a person who formerly used substances, I am very excited about the announcement today. Having a place where people can use their substances in a supervised and supportive way will save lives and help all members of the community become safer and healthier. People who are street-involved are very vulnerable and I have personally known many people who have died of unintentional overdose. It is heartbreaking and having access to supervised injection services will help Albertans around the province.”

“Our son Danny was in recovery when one more pill took his life in 2014. He was home alone when he overdosed and nobody there to help him. He lived within walking distance to one of the locations now approved to offer supervised consumption services. If the service had been available to him he could be here today. For me, supervised consumption services are about keeping people alive so they can make a better decision on another day.”

AMSISE consulted widely with the community about plans to incorporate supervised consumption services at the three approved sites of Boyle McCauley Health Centre, Boyle Community Services and the George Spady Centre. AMSISE held six open houses, knocked on 850 doors in surrounding neighbourhoods and met with community leagues, law enforcement, business associations and substance users. A survey of 1,869 Edmontonians found that 81 per cent of people agreed with the proposed model to integrate supervised consumption services into the inner-city agencies.