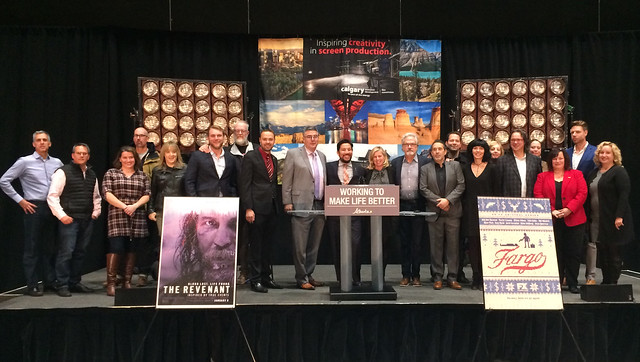 “Strengthening Alberta’s vibrant film and TV industry is part of our government’s plan to support and create jobs, diversify the economy and make lives better for Albertans. When Alberta is showcased through film and television, it attracts tourists, job-seekers, investors and entrepreneurs. That’s why we designed a stable approach to growing the sector that better reflects today’s industry and our fiscal environment. The government is committed to investing responsibly in areas that will bring the largest economic and cultural benefit to Alberta, while supporting our world-class talent and infrastructure, Alberta families and communities.”

The Alberta Production Grant was first launched in 1998, designed as an arts program and for small productions like made-for-TV movies and documentaries. In the last few years, the industry has dramatically changed, with more producers of high-quality, big-budget films like The Revenant or Netflix productions choosing to film in Alberta. The Screen-Based Production Grant is designed to address the needs of both commercial and cultural productions.

The Screen-Based Production Grant will make $45 million per year available to eligible production companies working in Alberta. The grant will offer productions a cash grant of up to 30 per cent of eligible production expenditures made in Alberta. Applications will be evaluated through a competitive process that awards points based on criteria such as economic or cultural benefit to Alberta, job creation, the use of Alberta cast and crews, the use of Alberta infrastructure such as the Calgary Film Centre and community or regional impact.

“Film and television industry is an important part of diversifying Alberta’s economy and creating jobs across the province. Alberta has outstanding infrastructure, diverse locations and world-class talent, and today’s announcement from the Government of Alberta will help ensure the industry is able to grow and prosper in a sustainable way.”

“This is a great step forward in supporting film and TV production in Alberta. It is important that we create opportunities for Alberta stories to continue to be told in our province, and I’m happy to see the commitment from Minister Miranda and the government to help do that. The opportunity to increase the production cap for larger-budget productions is important for attracting more business to Alberta, and I’m also glad to see a focus on supporting local cultural productions as well.”

“Today’s announcement is wonderful news, not only for supporting our award-winning crews, but for creating more jobs and cultivating new local talent and opportunities for Albertans entering the industry. I am very confident that these changes will go a long way towards increasing overall production volumes for larger-budget episodic content in our province.”

The new grant program will begin accepting applications Oct. 25. More information, including a step-by-step application guide, can be found on the Alberta Media Fund webpage.