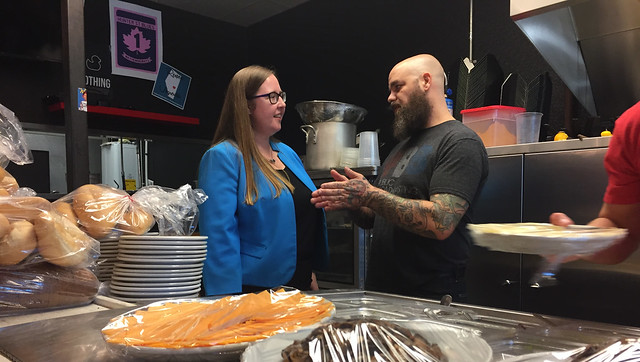 Mark Bellows, co-owner of The Local Omnivore, explains the benefits of paying his workers a fair wage.

As the province’s economy continues to recover, Alberta’s lowest-paid workers will see their hourly wage increase to $13.60 from $12.20. This is the third step in the Government of Alberta’s gradual phase-in of a $15-per-hour minimum wage by Oct. 1, 2018.

“All hard-working people deserve to earn enough money to support themselves and their families. Our government is staying true to our commitment to make life better for those Albertans who earn the bare minimum. This increase will boost the spending power of low-income people, which supports Alberta’s economic recovery.”

“Providing our employees with more than minimum wage for me is a personal decision – and it’s a moral decision. From a business standpoint, it’s about trying to make our company stronger by being responsible and providing income security for our employees. By paying them more, you respect their time and you also respect your business’ bottom line.”

"Low-wage earners are predominantly female, over the age of 20 and employed in full-time permanent positions. Reducing poverty and income inequality is an important reason to stick with the commitment to increase the minimum wage to $15 in October 2018.  Just as important is ensuring that low-income working Albertans are able to earn enough to pay for basic expenses."

The increase will mean low-wage Albertans have more money to spend on their basic needs, such as housing, transportation, school supplies, clothing and groceries. This increased spending power, in turn, helps stimulate our economy. Employers will also benefit from increased employee productivity and job satisfaction, as well as decreased turnover and training costs.

Employers and employees with questions about minimum wages can contact the Employment Standards Contact Centre at 780-427-3731, or toll-free at 1-877-427-3731, or visit work.alberta.ca/es.