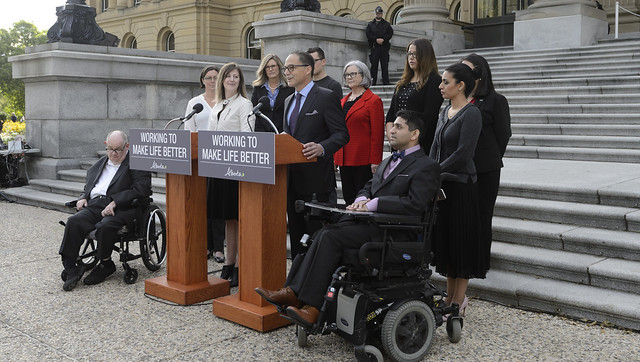 The province launched its online recruitment website one year ago to make it easier for Albertans to apply for governance positions on provincial agencies, boards and commissions.

Government is inviting Albertans to join the 5,000 others who have applied for more than 700 positions during the last year at boards.alberta.ca.

“One year ago, I said the boardroom tables of our agencies need to reflect today’s Alberta. I told Albertans that appointments to boards would no longer be about who you know. They are now about what you know and how best you can serve the province and make life better for all Albertans.”

Government is also working to improve gender balance on provincial agencies. In March 2015, only 32 per cent of board members were women. Today, that number is nearly 48 per cent.

“This is women’s equality in action. We have worked to actively recruit qualified women because we believe government boards should reflect the province’s rich diversity. It’s time for gender equality at all decision-making tables in Alberta, including boardroom tables, and today we celebrate that achievement.”

In June, the province added an optional survey to the site to measure the diversity of applicants, including age groups and languages spoken.

To promote the site and encourage more Albertans to apply and serve on provincial boards, the government also produced a series of videos featuring Albertans appointed within the past year. The videos highlight individuals’ reasons for joining a public agency and the diverse range of experiences and backgrounds each member brings.

“I strongly believe in the diversity of boards. That includes different age groups, different educational backgrounds and different life experiences. All of those things together are what push the envelope, what makes a board ask a lot of questions and, at the end of the day, come to a great decision.”

“It’s so easy to look at government as such a huge operation and think it churns on its own. You can forget it takes a lot of people to make things happen—and they happen by people getting involved. When you have services that the government is providing, the input on how the services are going to be delivered should come from a broad perspective.”

“It’s important to keep rural communities alive and agriculture is a big part of it. You need people to be involved. Find one aspect that you’re really interested in, something you’re really passionate about, and just go for it.”

“Being an Indigenous woman, culture is very important to me—as well as tourism, because of the connection to the land. It would be wonderful for those who have the acumen and the passion to look at ways to utilize those gifts to bring to a board.”

A notification tool on boards.alberta.ca gives candidates the option to receive email alerts when specific board opportunities arise. The site also provides additional details about each agency, board and commission, including remuneration, current opportunities and the term of each board member.

Provincial agencies, boards and commissions provide leadership in advisory, regulatory, corporate enterprise, service delivery and public trust roles. Alberta Health Services, Travel Alberta, the Alberta Apprenticeship and Industry Training Board and the Alberta Gaming and Liquor Commission are a few well-known examples. Others include the New Homebuyer Protection Board, the Metis Settlements Appeal Tribunal and the Irrigation Council.