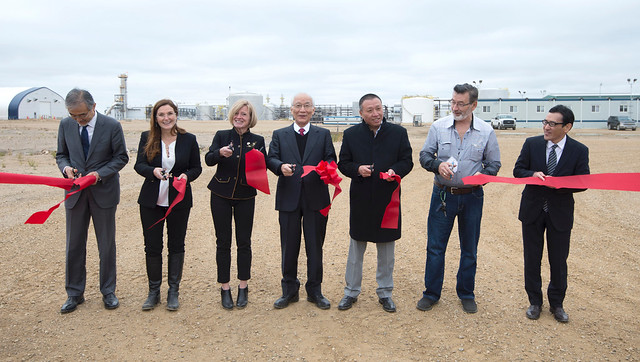 “Good jobs for Albertans, billions of dollars in new investment and a growing economy – that’s what this expansion project means. I want to thank JACOS for their work here and underscore that it’s never been more important for us to get new pipelines built, which will help diversify our markets and further strengthen our ties with Asia.”

Construction of the Hangingstone project supported roughly 1,400 direct and indirect jobs at its peak and JACOS currently employs 170 people*. Over its decades of work in Alberta, JACOS has employed hundreds of Albertans.

“The startup of this project is meaningful for Alberta as it is being sanctioned, with confidence, even in the current challenging economic conditions. The attendance of the Premier is very encouraging not only for JACOS and its partner, Nexen, but also for other international investors who are seeking opportunities in the vast oil sands resources and want to be assured of the Alberta government’s support.”

The Hangingstone project is currently producing about 5,000* barrels of oil a day with full production expected to reach approximately 20,000 barrels per day by the middle of next year. JACOS was the first Japanese-owned company to work and invest in the oil sands, starting in 1978.

Energy Minister Margaret McCuaig-Boyd met with JACOS’ parent company in Tokyo on Sept. 7 as part of a three-country mission through Asia, promoting investment in Alberta’s energy sector. Minister McCuaig-Boyd thanked JAPEX for its ongoing investments in Alberta. In her discussions with company executives and Asian investors, the minister stressed Alberta’s support for the Trans Mountain pipeline expansion, which would provide access for Alberta’s resources to Asian markets.

In April, Premier Notley and Economic Development and Trade Minister Deron Bilous also travelled to Japan to meet with government and industry leaders in a range of sectors, including energy, forestry, clean technology and tourism. During the trade mission, the Premier signed an agreement with the Japan Oil, Gas and Metals National Corporation (JOGMEC) to work together on scientific research and technical components of oil and gas exploration, development and production.

That was the Premier’s first trip to Asia and it built on previous trips by Minister Bilous, Agriculture and Forestry Minister Oneil Carlier and Energy Minister McCuaig-Boyd. In November 2016, Minister Bilous led one of the largest ever missions to Asia, where he was joined by more than 80 businesses and associations with ties to Alberta. Many of the relationships formed on that trip are showing real results for Albertans today.

Listen to the announcement