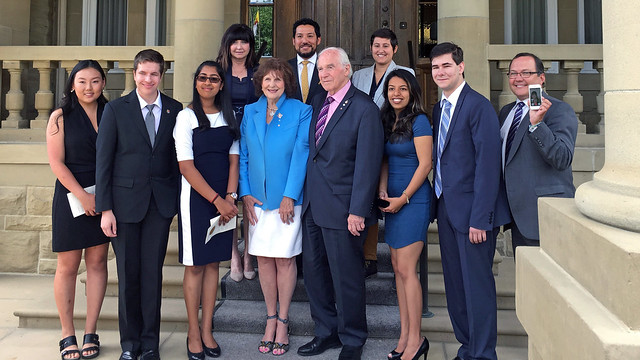 Lt.-Gov. Lois Mitchell presented the 2016 Queen’s Golden Jubilee Citizenship medal to five of eight students at Government House. The medal recognizes the recipients’ volunteerism and leadership within their communities and schools. Andrew Min and Chu Qian Li were not in attendance and will receive their medals later. Emily Vilcsak’s father accepted on her behalf.

“These thoughtful and hardworking young leaders offer great examples of the power of giving back. They remind us that we all can play a role in making our communities stronger, healthier and more compassionate places. They’ve already accomplished a great deal and I trust their dedication to active citizenship will continue to serve them well in the future.”

“These eight students are truly inspirational. From raising awareness about critical issues to actively fundraising to support their causes, these young Albertans are visionaries. They have worked tirelessly to make positive, empowering change and to ensure the voice of youth is heard. We could not be more proud of their efforts and wish them all the best in their lives and future endeavours.”

The medal is awarded annually to eight Alberta students. The 2016 recipients are:

Recipients are selected from Alberta high school students who received the Premier’s citizenship award that year. Medal recipients are chosen by a selection committee of Albertans who are themselves outstanding citizens, volunteers and community members.

The award includes a $5,000 cheque, a letter of congratulations from the minister of Culture and Tourism, and a medal and  letter of commendation presented by the lieutenant-governor.

The award program is operated in partnership between Culture and Tourism and Advanced Education. Since the program’s inception, 111 individuals have received the QEII Medal, including these eight recipients.