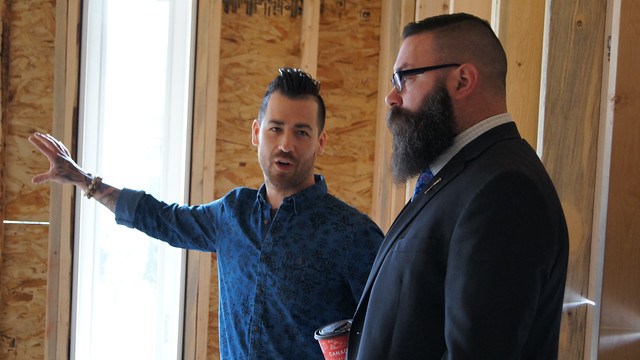 Richard Nault of UrbanAge Homes gives Minister Anderson a tour of a home under construction.

“When Albertans buy a new home, they’re making one of the biggest investments they’ll ever make. It’s also one of the most important – it’s where we raise our families, host our friends, and build relationships with our neighbours and community. We want to make sure that Albertans are protected when they make these investments so they don’t have to worry, and so they know their home was built by one of the many qualified, skilled builders in Alberta.”

Currently there are no minimum qualifications to be a builder in Alberta. If passed, this bill would require builders to maintain an active licence to build new homes and secure warranty coverage. They would also need to show they are knowledgeable in home construction and are in good financial standing.

“CHBA - Alberta is looking forward to working in partnership with the provincial government on including licensing as part of the New Home Buyer Protection Act. While there is still plenty of work to be done, the ability to remove builders who demonstrate a proven, negative track record will be a benefit to every Albertan – including those in the industry. Our members have always been on the leading edge of the industry, including requiring warranty coverage for more than 40 years. We want to make sure that licensing protects affordability and choice for Albertans – while also recognizing the many upstanding builders providing homes and jobs throughout the province.”

“CCI North Alberta is very pleased that the Alberta government is proposing legislation that will protect new condominium owners. This type of consumer protection legislation has been desperately needed for decades. It will hold developers accountable for poor building practices and allow condominium boards to prevent large special assessments. It will make a tangible difference in protecting consumers.”

“Builder licensing would be an effective way to help reduce the amount of poor quality product and workmanship on the market. There should be a builder registry where consumer could enter a builder’s name to see if they are in good standing with the building authorities. Builder licensing needs to be in place to protect the consumer from the ‘so called builders’.”

“We depend upon the province to ensure that all builders have the proper qualifications and knowledge of the Building Code. We definitely support licensing to provide these safeguards.”

The bill would also create an online registry of licensed builders to help homebuyers select a reputable builder. As set out in the existing home warranty program, people who build their own homes (owner-builders) would not be required to have a licence.

The enhanced builder information program, launched in June 2016 to support home reconstruction in Fort McMurray, provided some foundational elements for builder licensing in Alberta. It requires builders to complete a declaration through the New Home Buyer Registry before applying for a building permit. All declarations are posted online to help consumers make a more informed decision when choosing a builder. To date, more than 190 declarations have been submitted by builders.

“These measures build on the New Home Buyers Public Registry pilot, which empowered Wood Buffalo residents to make informed decisions during the rebuild process. Builder licensing promotes builder accountability and protects homebuyers in the biggest purchase of their lives.”

Government consulted with stakeholders on a builder licensing program in February and March through focus groups and an online survey. More than 1,200 Albertans completed the survey, with 78 per cent of respondents supporting builder licensing.

Service Alberta offers a number of additional resources, including consumer tip sheets to help Albertans understand their rights and responsibilities when choosing a builder or hiring contractors.