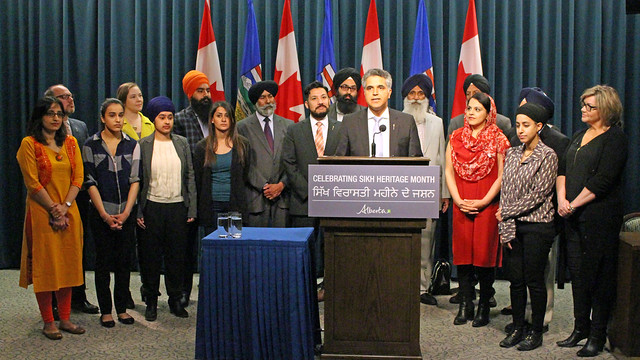 Sikhs have been making Alberta their home since the early 1900s. Many arrived in Alberta and worked on the Canadian Pacific Railway, in sawmills and on farms.

“Sikh Heritage Month is an opportunity to celebrate the beauty and wisdom of the Sikh culture and the contributions that Sikh Canadians have made to communities across Alberta. I encourage all Albertans to observe Sikh Heritage Month and to explore Alberta’s rich and diverse history.”

“Albertans are proud of our extraordinary cultural diversity and our commitment to be a welcoming and inclusive province. Sikh Heritage Month is an opportunity to educate and recognize the rich diversity of thoughts and ideas that Sikh Albertans contribute to our communities and to celebrate Sikh culture together.”

“Albertans of Sikh heritage are an important part of our province’s historic, cultural, political and economic fabric. Sikh Heritage Month is an opportunity to reflect on their place in Alberta’s story.”

“The Sikh community in Alberta thanks Minister Sabir and the government for officially recognizing April 2017 as Sikh Heritage Month. Sikh Heritage Month has been long overdue in this province. It is an opportunity that not only sheds light on the contribution of Sikh Albertans but also provides a chance learn more about what it means to be Sikh.”

“Congratulations to the Government of Alberta for taking a clear stance on diversity and inclusion.  Sikh Heritage Month will help create a society that is more accepting and tolerant, promote a sense of belonging for the Sikh community members, and help build an even stronger Alberta.”

April is a significant month for the Sikh community. It’s when Sikh Canadians celebrate Vaisakhi (Sikh New Year), and signifies the formation of the Khalsa, and also the Sikh articles of faith in 1699.

2017 is a significant year for Sikh Albertans, as the 350th    anniversary of the birth of the tenth Sikh Guru, Sri Guru Gobind Singh Ji is celebrated in Alberta and around the world.

The Government of Alberta will celebrate Sikh Heritage Month with members of the community on April 11 in Edmonton and on April 28 in Calgary. An exhibit of Sikh artifacts will be on display in the rotunda of the Alberta legislature throughout the month.