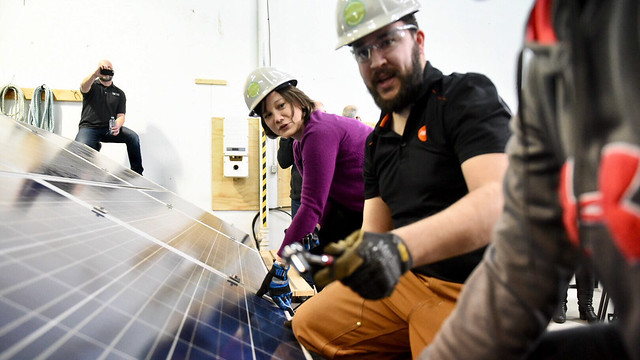 Homeowners, businesses and non-profit organizations will receive rebates for rooftop solar panels that meet the Residential and Commercial Solar Program requirements as early as this summer.

“There’s a lot of buzz in Alberta around small-scale solar. This program will make solar power affordable for more Albertans, leading to new panels on 10,000 Alberta rooftops by 2020. Along the way, we will create jobs and local expertise in an emerging industry.”

Solar uptake has doubled in Alberta since 2015, bolstered by initiatives like the Alberta Municipal Solar Program and the On-Farm Solar PV Program. Over the next five years, the Residential and Commercial Solar Program will build on these existing programs. By 2019, the new program is expected to:

To ensure Albertans receive timely access, the government is posting a Request for Proposal to identify a third party to deliver the new program. Details will be defined in coming months, including qualifying systems, installation and eligibility requirements.

“The Energy Efficiency Advisory Panel heard that Albertans wanted this program. The Prairies have the best solar resources in Canada, and there are a lot of potential investment opportunities. This is the first of several programs that will help create jobs and diversify Alberta’s energy economy into clean sources of energy.”

“Albertans are ready to go solar, with growing demand, a world-class solar resource and an eager and capable solar industry. A sustained government push has been the missing piece for creating local jobs and clean energy in our province.”

“We are proud to play a continued role in giving workers the tools they need to thrive in the province’s growing renewables sector. Together, we are building a stronger, more prosperous economy for all Albertans.”

The Residential and Commercial Solar Program is a reinvestment of the carbon levy.