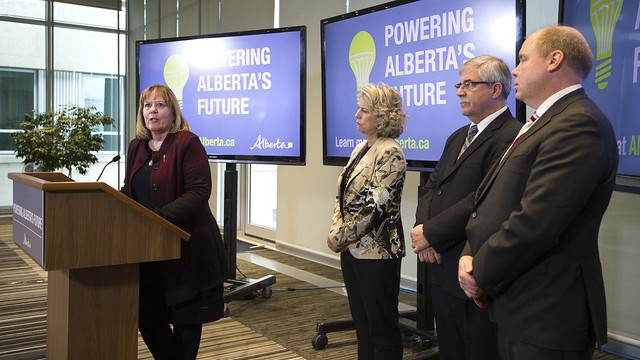 In capacity markets, private power generators are paid through a mix of a competitively auctioned payment of their fixed costs and prices from the spot market. Capacity markets directly benefit consumers by:

This transition was recommended to the government by current and potential energy investors, as well as by the Alberta Electric System Operator (AESO), which oversees the province’s electricity system in the interests of the public.

Alberta’s capacity market will be developed carefully and in consultation with stakeholders and will be in place by 2021. This will ensure that existing investments, including existing renewables, are treated fairly and that there is a level playing field for competition.

Capacity markets serve tens of millions of electricity consumers in more than 30 U.S. jurisdictions and in the United Kingdom and elsewhere.

“Think of capacity markets as ‘Market Plus.’ They support better planning and reliability, while using markets and competition to meet the energy demands in the most cost-effective way possible. And, because they’re used all over the world, capacity markets are familiar to investors, who like the stability and predictability they bring. Moving in this direction will help Alberta attract investment in the new, lowest-cost capacity we need to smooth our move away from coal-fired generations and create jobs as we do.”

“After thorough analysis, the AESO concluded that the current energy-only market will not ensure that Alberta has a reliable electricity system in the future. There has been a growing reluctance for developers to invest in energy-only markets and this global trend was a critical factor in our recommendation to move to a capacity market.”

This announcement follows the government’s move to put a price cap of 6.8 cents per kilowatt hour in place for families and small businesses on the Regulated Rate Option from June 2017 until June 2021. Together, the capacity market and price cap will address the volatility that consumers are experiencing in today’s retail and wholesale electricity market and ensure that Albertans have access to stable, low-cost sources of electricity.

“We look forward to engaging with the Government of Alberta on the evolution of Alberta’s electricity market design, including participation in stakeholder consultations regarding the design and introduction of a capacity market. A well-designed and fairly implemented capacity market can deliver an affordable power supply for Albertans, reduce market price volatility, and provide certainty that generation capacity will be there when needed.”

“We welcome a shift to a capacity market in Alberta. It will enhance our ability to make investments in existing and new generation to the benefit of customers and other stakeholders in the services we provide.”

“I spent the last eight years of my career as the CEO of PJM Interconnection, which has a mature capacity market structure. Private investors from around the world have built over 30,000 megawatts of new generation in PJM under this market structure, which kept the lights on at stable prices. Investors have shown a growing reluctance to invest in the riskier energy-only market designs around the world, preferring the price stability and revenue certainty provided by a capacity market structure. I am confident this model will work well in Alberta too, ensuring future stability in your admirable and smooth transition to a lower carbon electricity system.”

“New capacity will be needed to back up renewables in Alberta as it transitions to a cleaner energy future. We have seen the government take steps to ensure low costs for Albertans by requiring new generation be sited near existing transmission, by offering long-term contracts and by focusing on universal, or grid-scale, projects. We are confident the government will continue on this path and find the lowest cost way to add new capacity for Albertans.”

“In our discussions with lenders, equity providers and electricity facility owners and developers, we found positive interest in a potential capacity market in Alberta. Other capacity markets, for example PJM, have successfully fostered development of new facilities and there is reason to believe that Alberta could be similar. This contrasts to the lack of interest we found – among all of these groups – in making any more investments in an energy-only electricity market.”

“The Western Interstate Energy Board applauds the Government of Alberta’s decision to transition to an electricity capacity market framework. This transition is consistent with the North American trend to decarbonize the electricity grid, attract needed generation investment and jobs, and provide reasonably priced power, all while maintaining electric grid reliability that individuals, families and businesses depend on. Alberta is an important part of the western interconnected electricity system, and the co-operative efforts to enhance the economy and well-being of western states and provinces. Moving to a capacity market will further these aims.”