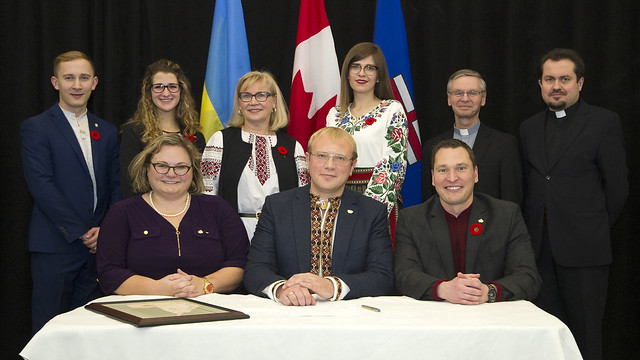 The Act states that, starting in 2017, Sept. 7 of each year shall be known as “Alberta’s Ukrainian-Canadian Heritage Day.” The date was chosen to honour the first officially recorded Ukrainian immigrants, Ivan Pylypiw and Vasyl Eleniak, who arrived in Canada on Sept. 7, 1891.

“Our ancestors’ journey to Alberta was often one of sacrifice and uncertainty. They overcame incredible hardships, and this is a way to honour them for generations to come. From agriculture and industry, to politics, academia and culture, they and their descendants helped build this province. I am so proud every one of my colleagues supported the call to celebrate the Ukrainian community’s tremendous contributions.”

“This Act is an honour to all Ukrainian descendants who made Alberta home. This acknowledges our contributions to the fabric of Alberta over the last 125 years, not just with our rich culture but to the economic, political, educational and social landscape. The Ukrainian Canadian Congress-Alberta Provincial Council thanks Minister Bilous for his leadership and the entire legislative assembly who once again made history and made this Act together.”