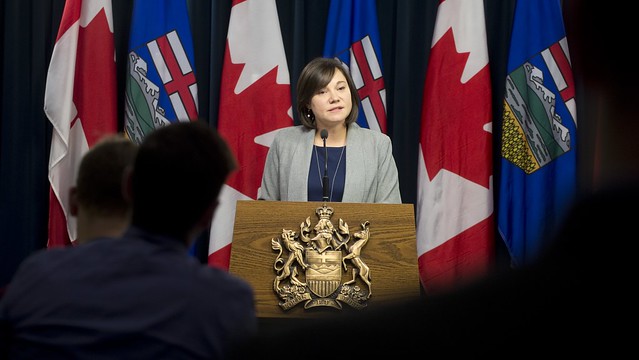 Minister Phillips announces the Oil Sands Emissions Limit Act as the next step in the Climate Leadership Plan.

Minister Shannon Phillips today introduced the Oil Sands Emissions Limit Act as the next step in the Climate Leadership Plan.

“Putting a limit on oil sands emissions shows how Alberta can be an energy producer and a world leader on climate action. It will drive innovation and reduce emissions per barrel, while still allowing for production growth and development. We look forward to reviewing the implementation advice offered by our expert Oil Sands Advisory Group this spring.”

The legislation limits oil sands greenhouse gas emissions to an annual maximum of 100 megatonnes, with allowances for new upgrading and co-generation. That figure was established by a diverse group of stakeholders and was recommended to government by environmental organizations and representatives of Alberta’s oil sands industry. It sets a framework for additional implementation advice from the Oil Sands Advisory Group, which was announced in July 2016.

The cap is a cornerstone of Alberta’s climate leadership plan, allowing the oil sands industry to grow sustainably, while repairing the province’s reputation. Limits on oil sands emissions will provide an incentive for companies to invest in greenhouse gas reduction as well as innovative technologies that will pave the way for Alberta’s energy industry to lead in a low-carbon future.

Alberta’s climate plan and the oil sands emissions cap were lauded by U.S. President Barack Obama, and Minister Phillips will promote the plan at the United Nations climate conference later this month in Marrakech, Morocco. This plan will enhance Alberta’s reputation for developing pragmatic solutions to climate change.

The legislation will provide certainty for investors and drive innovation among producers to create new solutions for energy extraction, helping to protect jobs and create new ones.  At the same time, tackling emissions will protect the health of future generations of Albertans and Canadians.

"At GE we know that innovation, collaboration and speed are key to solving big challenges. Alberta’s Climate Leadership Plan utilizes the carbon revenue to reinvest in technologies that will lower emissions.  We will work with customers and government to develop and deploy the technology that will help industry succeed within this new framework."

"Today Canadians, and in fact the international community, should thank Albertans for the tremendous leadership shown by introducing one of the first legislated emissions limits on an oil jurisdiction in the world.  By capping emissions in the oil sands, the Government of Alberta has recognized the importance of acting on climate change while providing certainty that will stimulate clean technology."

“By investing in emissions reduction technology, the Government of Alberta is not only reducing emissions in Alberta, it is playing a leadership role in the solution space to the global issue of climate change. They are positioning Canada as a clean tech leader, and developing technologies that can be applied here and have the potential to be exported around the world. With the technology being developed in Alberta we are confident Alberta can continue to grow its industry while reducing emissions.”