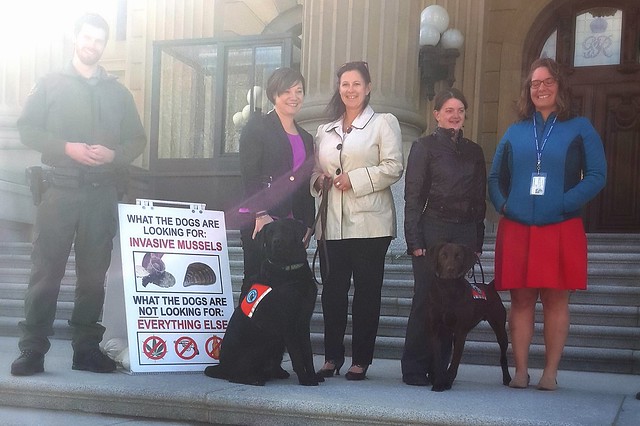 Hilo and Diesel, two of the team’s working dogs, along with their handlers and partners from the southern irrigation districts who have supported the team financially, met with the minister at the provincial legislature where she recognized partners who have made the program such a success.

“On behalf of Albertans, I sincerely want to thank all our partners for helping lead the way in mussel detection in our province. Together we have made the Conservation K-9 Program not only a reality, but an extraordinary success.”

The program was created through partnerships with the Eastern, Bow River, Taber, Lethbridge, Northern, Raymond and the United Irrigation Districts.

“Invasive mussels will have devastating effects if introduced into Alberta’s waterbodies. We realize that only by working together can we protect our water, and we are very proud to be able to help bring the Conservation K-9 Program to fruition.”

Inspectors at the Coutts inspection station near the Montana boarder have already intercepted one mussel-fouled boat since opening for the season in March, and it is expected that this will be only one of many such incidents during this summer’s boating season.

The dogs and their handlers have completed more than 600 inspections across the province and made many friends along the way. Each watercraft that is inspected by a canine receives a special “You’ve Been Sniffed” card, which includes a picture of the dog.

The Minister and guests also attended a live demonstration of the Conservation K-9 Program in front of the Legislature where Diesel’s skills finding hidden zebra mussels on a boat were put on display.

In 2015, 11 boats harbouring invasive mussels were intercepted. The most common, zebra and quagga, can spread quickly and live out of water for up to 30 days. Once introduced into a waterbody, they are very difficult to eradicate. The province estimates that an infestation of invasive mussels in Alberta could cost the province more than $75 million annually – including damage to infrastructure and recreational opportunities.