From October to December 2015, the Government of Alberta consulted with Albertans about the payday loans regulation. An online survey was conducted along with in-person interviews with those who use and provide payday loans.

More than 1,400 Albertans responded, with the vast majority saying that the allowable borrowing costs are too high. Currently, payday lenders in Alberta can charge $23 per $100 borrowed, the second highest rate in the country.

“Our government will protect vulnerable Albertans from paying exploitative interest rates on payday loans and spiraling into poverty. This is especially important now, when families are managing their household budgets more carefully than ever.”

An Act to End Predatory Lending will strengthen consumer protection in Alberta so that a short-term loan in a time of need does not lead to a vicious cycle of debt. Government is also supporting the work of credit unions and community groups like Momentum in Calgary to make better alternatives available.

“Momentum is encouraged by the Government's commitment to take action to ensure Albertans, especially those living on lower-incomes, can avoid unaffordable consumer loans and have the opportunity to access fairer short-term credit options.”

Highlights from the survey 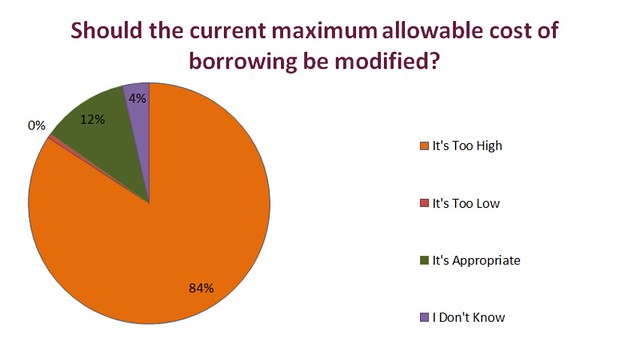 Cost of borrowing through a payday loan

The following table shows the total loan costs for a $500 payday loan at the current cost-of-borrowing rate of $23 per $100 borrowed, assuming consecutive loans are obtained at the end of each two-week payday cycle. 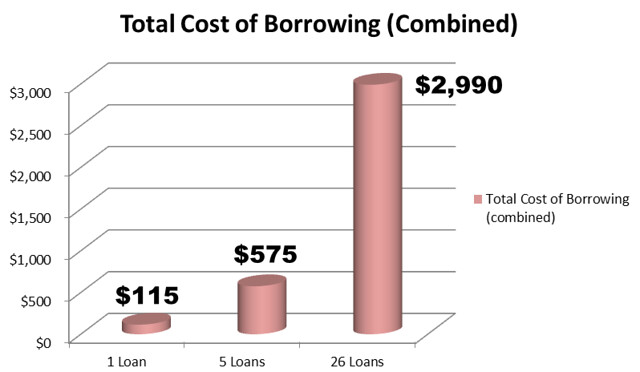 Comparison of the Costs for Various Forms of Credit

This chart demonstrates the total cost and relevant or annualized percentage rate (APR) – to the borrower to obtain a $500 loan through various forms of credit.