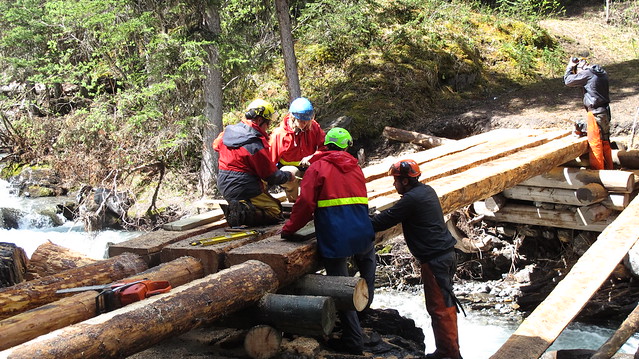 Kananaskis Country sustained the most extensive damage in its 36-year history from the June 2013 flood. The Alberta government committed $60 million to restore 41 damaged campgrounds, 51 day-use areas and over 160 kilometres of recreation trails with more than 65 trail bridges.

To help tourism rebound, the Alberta government is also committing $18 million to rebuild the Kananaskis Country Golf Course and protect it from future flood damage. In addition, a $200,000 tourism grant will support the 2014 Kananaskis Mountain Festival.

“Kananaskis Country is part of our Alberta lifestyle, legacy and identity, and it is a vital part of our tourism industry. We get away to Kananaskis to have fun and connect with nature, and so do people from around the world. Restoring parks infrastructure benefits the people in our communities, and helps support the local economy.”

“As well as being much loved by Albertans, Kananaskis Country is a major destination for conference business, sports tourism and leisure travellers from across Canada and the world. These visitors don't just play golf or hike trails; they stay in hotels, eat in restaurants, shop in retail outlets and support our recreational tour operators, helping to ensure a strong local economy."

"The floods of 2013 had a major impact on the economy of the Kananaskis region. We are thrilled to see the provincial government take an active role in the restoration of critical infrastructure such as the Kananaskis Country Golf Course and the numerous surrounding hiking trails, as well as supporting innovative new programs such as the Kananaskis Mountain Festival. Without this investment the negative impact of the floods would be felt for years to come."

When it was open, about 60,000 rounds of golf were played at the Kananaskis Country Golf Course annually, 85 per cent by Albertans. Designed by Robert Trent Jones, it is one of only two publicly accessible 36-golf courses in Alberta, and has been consistently ranked as a top 100 course in Canada by Score Golf Magazine. All but four holes were damaged in the June 2013 flood. The pro-shop, club house, tournament centre and other golf course buildings on higher ground were undamaged and are valued at $15 million.

“The restoration of the Kananaskis Country Golf Course is fantastic news for the golf and tourism industry in Alberta! People come from all over the world to see what Kananaskis is all about, benefiting businesses and other courses in the region. With a reduced rate for Albertans, the value has always been there and I couldn't be happier on behalf of the industry to hear the news today.”

The majority of the investment to restore parks infrastructure damaged by the June 2013 flood is expected to be reimbursed through the federal government’s Disaster Financial Assistance Arrangements.

Information on flood recovery work underway in Kananaskis Country will be available during Parks Day on July 20 in Bow Valley Provincial Park.