At approximately 12:06 p.m., EPS officers encountered a Chrysler 300 in the area of 92 Street and 112 Avenue. The vehicle was identified as stolen and officers began to follow it. The driver of the Chrysler 300 then began to drive erratically and appeared to be attempting to evade police. The officers did not pursue the vehicle.

At approximately 12:18 p.m., officers again located the Chrysler 300, which was now in the area of 97 Street and 111 Avenue. Officers resumed following the vehicle, which, a short time later, collided with a parked vehicle. Police activated their lights and sirens in an attempt to stop the vehicle, but the driver did not stop. Officers now pursued the vehicle.

During the pursuit, the Chrysler 300 became stuck in a snowbank in the area of 117 Avenue and 92 Street. An officer positioned his police vehicle in such a way as to prevent the driver of the Chrysler 300 from moving the vehicle.

The driver exited the Chrysler 300, and a confrontation between officers and the male ensued. Officers discharged their service weapons, hitting the male and causing him to fall to the ground.

Officers approached and began life-saving efforts on scene until Emergency Medical Services arrived and assumed care. The efforts were unsuccessful and the male was pronounced deceased on scene. A sawed-off shotgun was located near the male.

The driver’s door of a police vehicle on scene had damage consistent with being struck by shotgun fire. 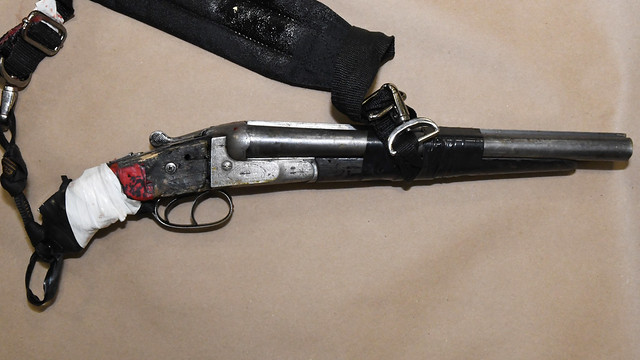 Shotgun located at the scene.

ASIRT’s investigation will examine the circumstances surrounding the officer-involved shooting. No additional information will be released.