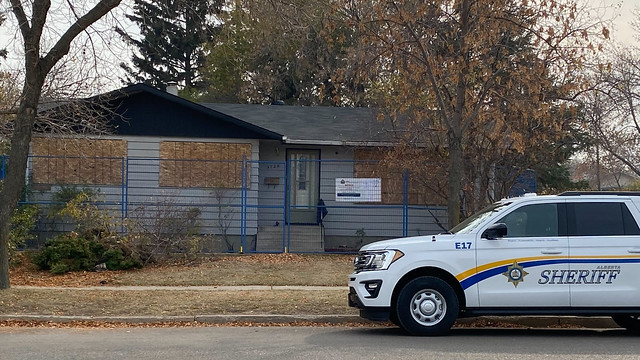 A court order authorized the Safer Communities and Neighbourhoods (SCAN) unit of the Alberta Sheriffs to board up this drug house in Lloydminster and erect a fence to prevent anyone from entering the property until Dec. 16, 2021.

The Safer Communities and Neighbourhoods (SCAN) unit of the Alberta Sheriffs obtained a court order against the owner of 5729 50 Street in Lloydminster that closes the property and forbids anyone from entering until Dec. 16.

The community safety order took effect Oct. 5, giving investigators the authority to erect a fence around the house, board up the windows and change the locks. These measures will remain in place and prevent anyone from entering until the closure ends.

The SCAN unit began its investigation in response to multiple complaints from the community, which is home to parks, playgrounds and a seniors’ residence across the street. Complainants reported finding used needles around the neighbourhood, seeing assaults spilling into the street and constant traffic to and from the property.

“Law-abiding Albertans shouldn’t be afraid to walk on their street or enjoy a day in the park because of drugs or gang activity. The diligent work of our Alberta Sheriffs has helped residents of this community reclaim those spaces and feel safe in their own neighbourhoods again.”

Investigators confirmed drug activity was taking place at the property. The SCAN unit also received evidence from the RCMP, which has responded to nearly 100 incidents there since the beginning of 2020.

SCAN investigators initially tried to resolve the complaints with a warning letter to the property owner, who doesn’t live on the premises. When the drug activity continued, SCAN applied for a community safety order and obtained judicial approval in Court of Queen’s Bench on Sept. 20.

Since its inception in 2008, Alberta’s SCAN unit has investigated more than 5,800 problem properties and issued nearly 100 community safety orders. The majority of complaints are resolved by working with property owners to keep criminal activity out of the community.