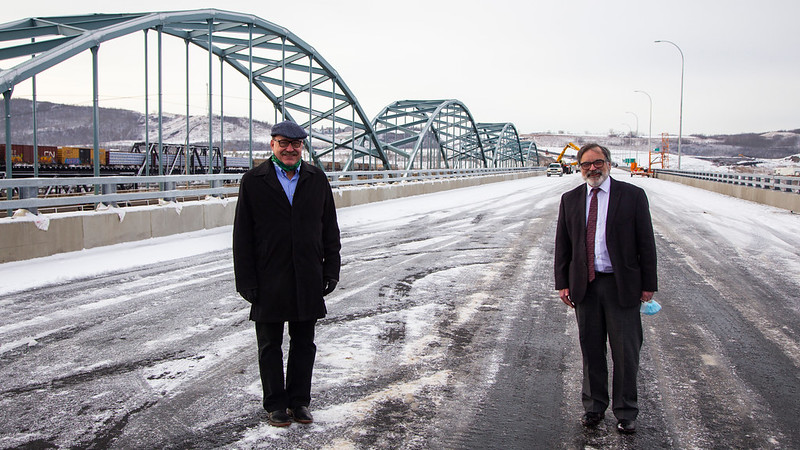 The new three-lane bridge will also ease congestion for residents and industry. Construction on the bridge began in 2017 and was completed on time.

“We want a safer and stronger northwest Alberta and this new crossing provides just that. Twinning the Peace River bridge makes it safer and easier for Albertans to access business and services on both sides of the river. Building this bridge has created hundreds of jobs when Albertans have needed them most.”

“The Peace River bridge project, started three years ago, was completed on time and on budget. The twinning links our schools, hospital and services with our businesses on both sides of the mighty Peace River and is important not only for our community, but for the entire region.”

“This bridge is and has been a great addition to our community. Throughout construction it has bolstered the local economy. Peace River is the gateway to northwestern Alberta and the Northwest Territories. This second bridge is going to expand that economic portal. Infrastructure catalyzes development. Roads and bridges are the pipelines for Alberta's most precious resource – its people.”

The new bridge, part of a $162-million twinning project, will eventually accommodate westbound traffic upon completion of upgrades to the existing bridge, which will handle eastbound traffic.

Upgrades to the existing bridge were announced as a part of Alberta’s Recovery Plan. Rehabilitation will begin early next year and is expected to be complete by the fall of 2022.

Alberta’s Recovery Plan is a bold, ambitious long-term strategy to build, diversify, and create tens of thousands of jobs now. By building schools, roads and other core infrastructure, we are benefiting our communities. By diversifying our economy and attracting investment with Canada’s most competitive tax environment, we are putting Alberta on a path for a generation of growth.