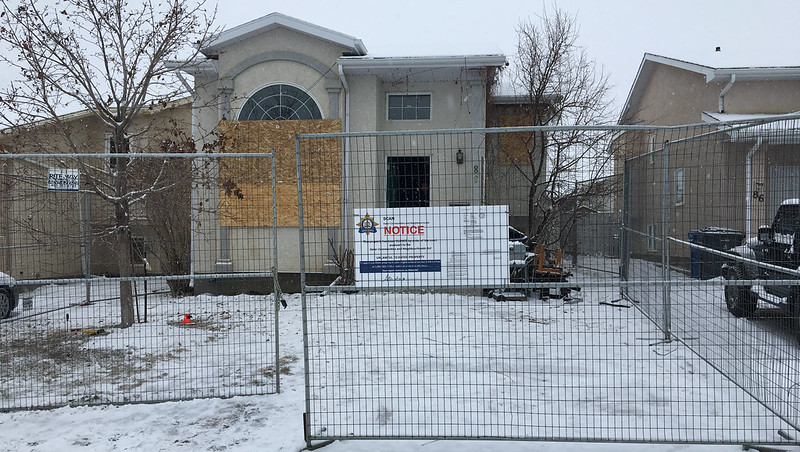 The SCAN unit of the Alberta Sheriffs obtained a court order to close this drug house at 82 Assiniboia Way in Lethbridge for 90 days.

The Safer Communities and Neighbourhoods (SCAN) unit of the Alberta Sheriffs obtained a court order that took effect at noon on Jan. 7, giving them the authority to close the house at 82 Assiniboia Way for 90 days.

Under terms of the community safety order, crews boarded up the house, changed the locks and fenced off the property to stop anyone from entering until April 6, 2020.

“Law-abiding residents of this community can take their neighbourhood back and breathe easier today, thanks to the SCAN unit. We value the relentless efforts of the Alberta Sheriffs and their law enforcement partners to keep Albertans safe, secure and protected.”

SCAN started its investigation in March 2018 in response to complaints from the community about drug trafficking and drug use. SCAN investigators confirmed drug activity was taking place, after observing several drug transactions and a large number of people coming and going from the premises.

Criminal activity at the property was also a concern for the Lethbridge Police Service, which responded to nearly 60 calls there between January 2017 and October 2018. Incidents reported to police included a home invasion, property damage and several calls about drug use involving needles.

Since 2017, police have executed three search warrants at the property, resulting in the seizure of drugs, weapons and a large amount of stolen property. During the most recent search in December 2019, police found methamphetamine and drug paraphernalia (scales, baggies and sales records) and laid criminal charges against the property owner.

Since its inception in 2008, Alberta’s SCAN unit has investigated more than 5,500 problem properties and issued more than 80 community safety orders. The majority of complaints are resolved by working with property owners to keep criminal activity out of the community.

MEDIA AVAILABILITY: SCAN Insp. Mike Letourneau will be available between 1:30 p.m. and 2 p.m. on Tuesday, Jan. 7 for on-camera interviews at 82 Assiniboia Way, Lethbridge.