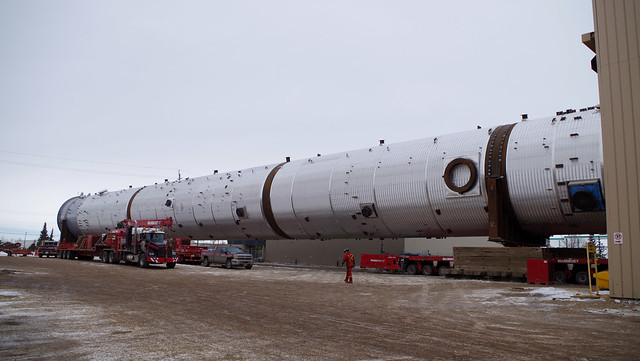 An 820-tonne piece of heavy equipment, called a splitter, left Edmonton on Jan. 6 for its destination in the Industrial Heartland, where it is scheduled to arrive on Jan. 9.

A new government study identifies the improvements needed to Alberta’s existing High Load Corridor over the next two decades to give industry a more efficient way to move large loads, like construction and oil rig equipment.

The High Load Corridor is a series of designated routes connecting areas across the province that can accommodate loads of up to 12.8 metres (42 feet) in height.

An enhanced High Load Corridor will mean improved infrastructure required for large loads, such as the 820-tonne petrochemical piece of equipment that is being moved from Edmonton to the Industrial Heartland Jan. 6-9.

“A strong transportation network and an effective High Load Corridor are critical to Alberta’s economic, social and environmental strength and diversity. I’m confident this strategy will help pave the way for long-term, sustainable economic growth and jobs in Alberta. Now, more than ever, this is critical for our province.”

“Infrastructure improvements targeted to industrial development enhance access to markets for Alberta’s resources which, in turn, plays a role in attracting investment to Alberta. The more Alberta can do in this area, the better.”

The Vinca Bridge, the recently announced projects on Highway 40, and the interchange at Highway 43X are all critical parts of Alberta’s High Load Corridor.