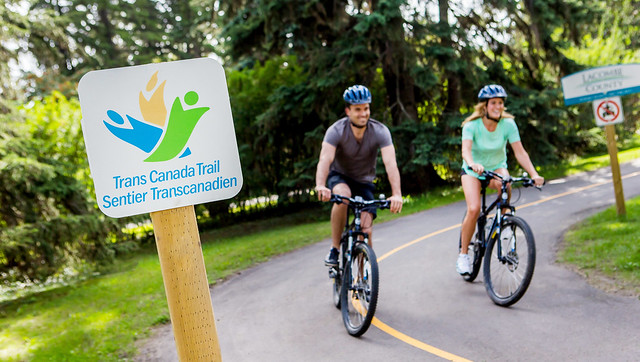 Riders enjoy part of The Great Trail (formerly Trans Canada Trail) in the County of Lacombe.

Breaking new trail, enhancing existing trail and adding bridges and signage are some of the 12 Great Trail projects that will receive funding.

“Alberta’s incredible trail network attracts tourists from around the world, helps Albertans be more active and connects people to nature. We are pleased to contribute to this legacy with our continuing support for The Great Trail.”

The Great Trail, formerly the Trans Canada Trail, is a national network of trails stretching more than 24,000 kilometres from the Atlantic to the Pacific and Arctic oceans. Three thousand kilometres of trail are in Alberta.

Alberta TrailNet is a non-profit organization that represents the province for The Great Trail. It will manage the new $1.93 million in funding for Alberta trails.

“On behalf of Alberta TrailNet Society and its regional and local trail partners, I’d like to express our sincere thanks for this funding which will enable continued work on the trail. Provincial funding has been critical in mobilizing volunteer resources and community support and in leveraging investments from donors and other levels of government. Many communities and thousands of recreational users have benefited from this and other provincial investments in the trail.”

Alberta has the second-longest portion of The Great Trail. The trail passes through 77 of Alberta’s cities, towns and villages, 24 rural municipal districts and several Indigenous communities. Portions of the trail are being moved off roadways to improve safety. To date, the Alberta government has invested nearly $10 million in The Great Trail.

Support for The Great Trail aligns with the guiding principles of a pan-Canadian policy document released in May 2018, A Common Vision for Increasing Physical Activity and Reducing Sedentary Living in Canada.