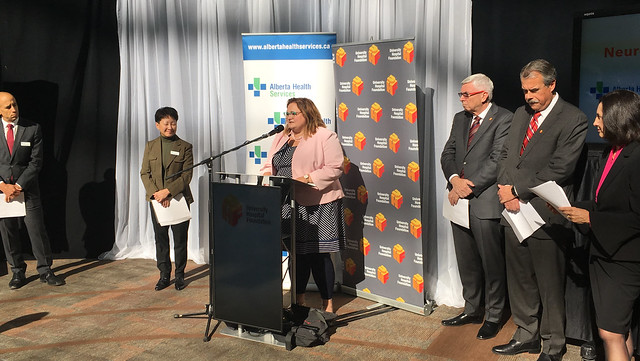 The $12-million investment will support further planning and functional design work for the project beginning in early 2019. In addition, the University Hospital Foundation is committing a further $12 million to help support the replacement of the nearly 40-year-old facility.

“Patients with head injuries and neurological conditions, and the world-leading health teams who support them, deserve access to state-of-the-art technology and modern facilities. This investment will take us one step closer to making that a reality at the University Hospital, and will help enhance life-saving care for patients here in Edmonton and across Western Canada.”

The current neuro ICU has 11 beds and serves as a referral centre for Edmonton and northern Alberta, northeastern B.C. and the Northwest Territories. The future expansion will increase capacity to 24 beds in single-patient rooms.

“Redeveloping the neuro ICU at the University of Alberta Hospital is a priority project that will increase capacity and improve family and patient experience by better coordinating care from diagnosis through treatment and rehabilitation. AHS is grateful for the University Hospital Foundation’s continuing support of this project and the many innovations it has funded as part of the Brain Centre Campaign.”

The University Hospital Foundation has raised more than $50 million in cash and pledges since launching the Brain Centre Campaign in 2011.

“Thanks to incredible community support, our vision to give patients at the University of Alberta Hospital access to the most advanced brain care in the country is becoming a reality. We have already accomplished so much, and we will do even more with the government’s commitment to match our $12-million commitment of new funding.”

In October 2017, Wayne Gretzky donated $99,000 to the Brain Centre and was named honorary chairman of the campaign.

“I’ve always like being part of a winning team. With support from a community like Edmonton, I know the Brain Centre Campaign will do great things and accomplish everything we set out to do.”

The current neuro ICU, which served more than 700 patients last year, is one of only two dedicated neuro ICUs in the country, and the only one in Western Canada.