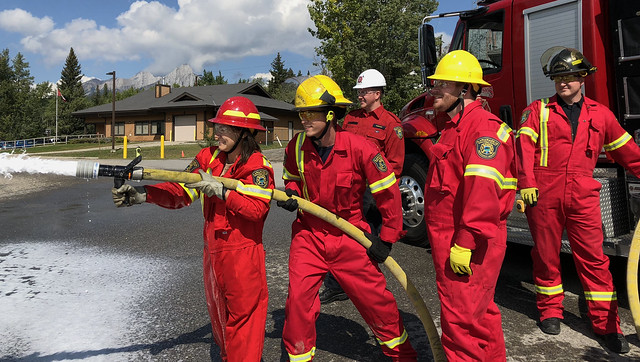 The new Kananaskis Emergency Services Centre (KESC) is currently under construction. The Government of Alberta has pledged $18.5 million for the multi-services facility which will provide a range of emergency services in the region, including fire, dispatch and ambulance.

“It is essential that emergency services personnel are well trained and have a purpose-built facility that allows them to do their jobs effectively, especially as the threat of wildfire increases due to climate change. The Firefighter Residency Apprenticeship Program, along with the new, state-of-the art Kananaskis Emergency Services Centre, will help keep visitors and Albertans living in K-Country safe.”

The KESC will serve as a base of operations during large-scale emergencies and support the Kananaskis Improvement District and Alberta Parks’ Kananaskis Public Safety team. Additionally, all emergency vehicles will now be housed under one roof, improving efficiency. The new facility will be greener, too, with solar panels on the roof. The KESC is on track for a fall 2019 opening.

The Firefighter Residency Apprenticeship Program is a one-of-a-kind, collaborative program designed to recruit and retain municipal firefighters within Kananaskis. Successful applicants complete a rigorous 18-month training program after which they are employed by Kananaskis Emergency Services, one of the frontline emergency services providers in the region.

The firefighter training program started in 2017 and is already training its second class of recruits. The first graduating class of recruits chose to stay with Kananaskis Emergency Services, however, graduates are free to seek work as firefighters in other municipalities.

Kananaskis Emergency Services is responsible for fire protection of all structures throughout Kananaskis and works in collaboration with Alberta Agriculture and Forestry to battle fires within the Wildland Urban Interface, which is where the community infrastructure meets forested areas.