These formulas are part of the next step in implementing Alberta’s Modernized Royalty Framework and will determine royalty rates and certain cost allowances. This milestone is another step towards implementing the recommendations from the Royalty Review Advisory Panel.

This announcement delivers on key recommendations of the panel to:

“From the day we launched the royalty review, our government has said it will be thoughtful, collaborative and that there will be no surprises. We have worked with industry associations, and I’m confident these formulas will meet the recommendations of the review panel, and create the right system for industry to remain competitive, grow and create jobs.”

“I commend the Alberta government for its timely approach to create a more modern royalty system through a constructive process. This has led to a royalty system that is true to the principles of the royalty advisory report. The new royalty system helps provide more clarity that investors need to plan for the future.”

“The Explorers and Producers Association of Canada is pleased that the conclusion of this royalty calibration process will allow investors and oil and gas producers to move forward with a clear understanding of the new royalty and fiscal terms. The well-run process allowed the thorough exchange of analysis and information between government and industry. The result is a modernized royalty framework, with more transparency and better suited to support investment and development of Alberta’s future energy resource opportunities.”

The new royalty system will reward producers who innovate to reduce costs below the industry average and increase production. Over time, the effect of the change will be to grow net revenues industry-wide, which in turn will make Alberta’s energy sector more attractive for investment, help create more jobs and increase total royalty revenues to the province.

There are three primary elements to the calculation of royalty payments from a well.

The Drilling and Completion Cost Allowance (identified as the C* value in the chart), is used for all resources. It determines at what point a well moves from a flat five per cent royalty rate to a price sensitive rate. The C* value is calculated using industry-wide averages for various factors involved in drilling operations.

There are price sensitive royalty rates for various commodities. They apply over most of the life of a successful and productive well. As wells decline in production, a maturity rate applies. This recognizes higher unit costs and is aimed at minimizing the premature shutting in of production.

The full technical elements of each formula are available online at www.energy.alberta.ca.

How the Modernized Royalty Framework will work in practice

Government also continues to work on further implementation details and two additional strategic programs that were recommended by the Royalty Review Advisory Panel.

Further details on these programs will be released by May 31.

Illustration of the Modernized Royalty Framework 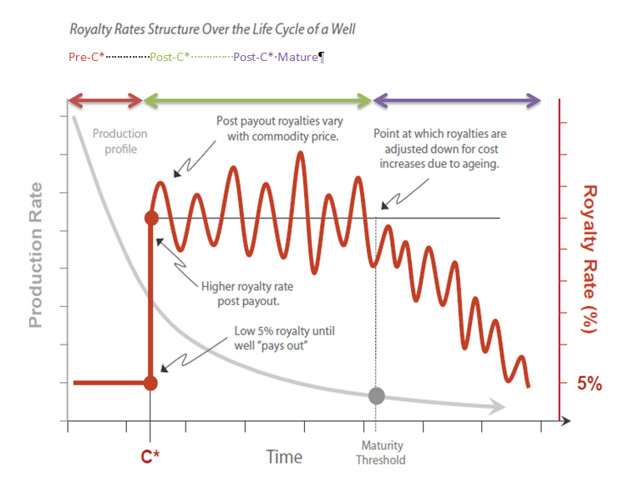