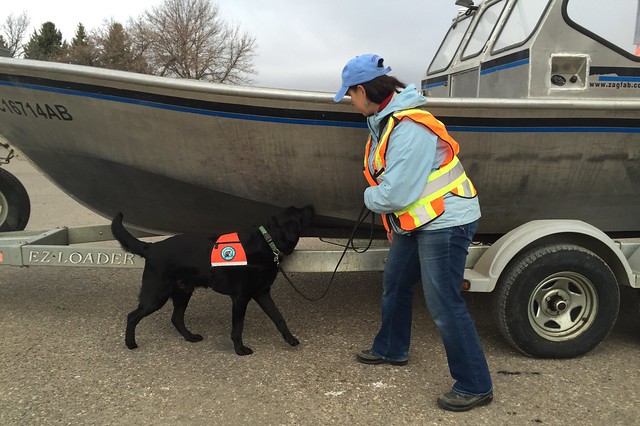 Hilo, a member of the K9 Conservation Team

Boating season is just around the corner and watercraft inspection stations are gearing up for the influx of snowbirds on their way home from the U.S. The Coutts inspection station opened for business on March 7 and is the first line of defence against mussels entering the province from south of the border.

“Mandatory watercraft inspections are one of the most important tools we have in aquatic invasive species prevention and prevention is the only way we can protect our water resources from a costly and devastating mussel infestation.”

The Dunmore and Vermilion inspection stations are scheduled to open in April, with the rest of the stations to be open by the May long weekend.

When highway signage indicates that a watercraft inspection station is open, all trailered watercraft must report to the onsite inspectors to have their boats, trailers and other water-related equipment checked for invasive species such as zebra and quagga mussels. This law applies to all watercraft, including motorized, non-motorized and commercially hauled.

More than 21,400 inspections were completed in the 2015 boating season, and 11 boats were decontaminated for mussels. It’s estimated that an infestation of invasive mussels could cost the province more than $75 million annually – including damage to infrastructure and recreational opportunities.

For more information or to report something suspicious on your boat or equipment call 1-855-336-2628 (BOAT).